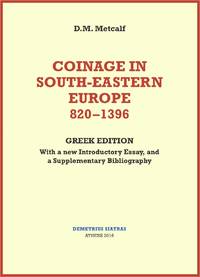 Description:
Athens: Siatras, 2016. Brand new. In English. Third augmented edition. Hard cover+jacket, 28 cm, 468 pp., maps; 8 plates; net weight 1750 gr. ISBN 978-618-82459-4-5.
The author's interest in south-eastern Europe was first aroused in 1954 when, as un undergraduate, he studied the geography of the area. He has subsequently made several visits to the former Jugoslavia and Greece, in order to work on the coins in museums in Athens, Corinth, Ljubljana, Thessaloniki, and Zagreb. The present work originated in an essay which was awarded the Society's Parkes Weber Prize in 1955. From it, there grew a Ph.D. thesis at Cambridge. Then, was published as a book under the title Coinage in the Balkans, 820-1355, by the Institute for Balkan Studies (Thessaloniki, 1965). The edition was exhausted in 1966, and the book was 'pirated' in the United States. After that the text had been extensively re-written and expanded, to take account of the hundreds of new books, articles and hoard-reports; its scope had also been… Read more
Item Price:
NZ$164.37
NZ$30.82 shipping to USA