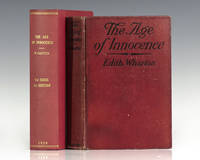 The Age of Innocence.

The Age of Innocence.

New York: D. Appleton and Company, 1920. First edition of the author's Pulitzer-Prize winning novel. Octavo, original red cloth. In near fine with some light rubbing. Housed in a custom chemise and clamshell box. An exceptional example. "There are only three or four American novelists who can be thought of as major," noted Gore Vidal, "and Edith Wharton is one." Listed on Modern Library's 100 greatest novels of the twentieth century. It is the basis for the 1993 Martin Scorsese film, starring Daniel Day-Lewis, Michelle Pfeiffer, Winona Ryder, and Miriam Margolyes.

Edith Wharton’s The Age of Innocence is set in upper-class New York City in the 1870s, during the so-called Gilded Age. The novel, which takes its title from artist Joshua Reynolds’ 1785 painting of a little girl, focuses on impending marriage of an upper-class couple: Newland Archer, a distinguished lawyer, and the shy, but lovely May Welland. Enter the bride's cousin, Ellen Olenska, plagued by a scandalous separation from her European husband, a Polish count. The presence of Ellen, a classic femme fatale, threatens the happiness of Newland and May. However, May’s determination must not be undermined as she proceeds to use everything in her power to ensure her marriage to Newland. Though the novel questions the assumptions and morals of the Gilded Age, it never explicitly condemns the era.  …And perhaps it should have. The Age of Innocence won the 1921 Pulitzer Prize for Fiction, making Wharton the first woman to win the prize; however, upon being awarded the honor, the novel was praised as “best present[ing] the wholesome atmosphere of American life and the highest standard of American manners and manhood.” Many claimed that even Wharton was taken aback when reviewers failed to see the irony of the title and her social criticism of 1870s New York society.  Of the many film, television, and theatrical adaptations of The Age of Innocence, perhaps most notable is the 1993 film of the same name, directed by Martin Scorsese, starring Michelle Pfeiffer as Countess Ellen Olenska, Daniel Day-Lewis as Newland Archer, and Winona Ryder as May Welland Archer. The film won an Oscar for costume design and Ryder was not only nominated for an Oscar, but won a Golden Globe Award for her portrayal of May Welland Archer.  The Age of Innocence is ranked 58th on Modern Library’s “100 Best” English-language novels of the 20th century and 45th on The Guardian’s list of the 100 best novels.

Read More: Identifying first editions of The Age of Innocence.

30 day return guarantee, with full refund including shipping costs for up to 30 days after delivery if an item arrives misdescribed.

Seller rating:
This seller has earned a 4 of 5 Stars rating from Biblio customers.
Biblio.co.nz member since 2012
Palm Beach, Florida
Ask Seller a Question

Founded by Matthew and Adrienne Raptis, Raptis Rare Books is an antiquarian book firm that specializes in literature, children's books, economics, photo books, signed and inscribed books, and landmark books in all fields. Our business model is simple: we strive to handle books that are in exceptional condition and to provide exceptional customer service. We are proud members of the Antiquarian Booksellers Association of America (ABAA) and the International League of Antiquarian Booksellers (ILAB) and exhibit at major book fairs in New York, Los Angeles, San Francisco and Boston, as well as other regional fairs.

rubbing
Abrasion or wear to the surface. Usually used in reference to a book's boards or dust-jacket.
fine
A book in fine condition exhibits no flaws. A fine condition book closely approaches As New condition, but may lack the... [More]
octavo
Another of the terms referring to page or book size, octavo refers to a standard printer's sheet folded four times, producing... [More]
clamshell box
A protective box designed for storing and preserving a bound book or loose sheets. A clamshell box is hinged on one side, with... [More]
Cloth
"Cloth-bound" generally refers to a hardcover book with cloth covering the outside of the book covers. The cloth is stretched... [More]
First Edition
In book collecting, the first edition is the earliest published form of a book. A book may have more than one first edition in... [More]

Aleister Crowley was a well-known and highly controversial figure in the first half of the 20th Century. A writer, occultist, magician, and mountaineer, Crowley impacted a diverse collection of sub-cultures and interests. See collectible Crowley from Biblio booksellers.