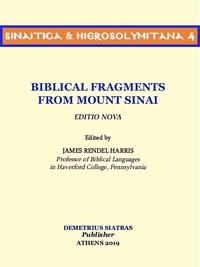 5 Copies Available from This Seller

Series: Sinaitica & Hierosolymitana, 4. New digital edition; you will receive the file on line. In English. Size A4, 92 pp., ill.

FROM THE INTRODUCTION: "The fragments in the present volume were examined by me during my visit to the Convent of St. Catharine in the Spring of the year 1889. It had long been my desire to make this journey and to combine the studies of two subjects of unequalled interest to the biblical inquirer, viz. the route of the Exodus, and the Library of the Monastery. And it is with much satisfaction and thankfulness that I find, on looking back over the fi9een days spent in the desert between Suez and Sinai, and the seventeen days of residence in the Convent, that my interest was on either hand well rewarded. This is not the place to ventilate my own theories of the Exodus, nor to discuss the views of earlier and be:er explorers than myself: it is sufficient to say that I have secured for myself an extremely strong conviction both of the fact of the Exodus and concerning its line of motion, which I reckon to be the richer for possessing. But with regard to the Convent and its treasures, I am glad to lay before those who are still interested in these matters . . . Thirteen years alter the publication of the Sinaitic Codex, a few additional uncial fragments of the Old Testament were published by Brugsch-Bey;2 he supposed them to belong to the Sinaitic Codex, and published them as such, although the merest glance on the part of anyone who was acquainted with the Sinaitic Codex would shew that this was a misapprehension. I venture to think that the disappointment caused by the correction of Brugsch's error outweighed the interest which should have been generated by the discovery of a portion of a new and unknown fourth century manuscript within the Convent walls. Many such manuscripts must have existed there, for, although we have not succeeded in finding the Codex to which the Brugsch-Bey fragments belong, we have found that there are plenty of biblical fragments of the fourth, fifth, sixth and subsequent centuries in the Library; and it is not to be assumed that there are no others because we have not found them, or because they do not happen to be mentioned in Gardthausen's catalogue. . . ."

IMPORTANT: Libraries and Institutions should also have to pay multiple-user fees depending on the size of the file.

Seller rating:
This seller has earned a 4 of 5 Stars rating from Biblio customers.
Biblio.co.nz member since 2011
ATHENS
Ask Seller a Question

New
A new book is a book previously not circulated to a buyer. Although a new book is typically free of any faults or defects,... [more]

Don't overlook that old city directory - it is priceless for authors, collectors who focus on specific cities, geneaology, and other niche interests. Learn more...