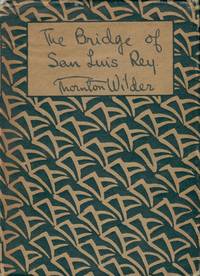 London: Longmans, Green and Co. Ltd., 1927. First Edition. 8vo, original blue cloth, lettered in gilt, and in the dustjacket. vii, 140 pp. A very good copy indeed, the interior and binding in very pleasing condition and with very little evidence of age or wear, the dustjacket with slight mellowing to the spine panel and some light wear to the crown of the panel. HANDSOME FIRST EDITION COPY OF THORNTON WILDER'S MOST FAMOUS 1928 PULITZER PRIZE WINNING NOVEL. Considered one of the towering novels of American fiction, this work continues to offer timeless insights into what it means to be human.
The last lines of Thornton Wilder's book THE BRIDGE OF SAN LUIS REY (1927), which won him his first Pulitzer Prize, have touched readers around the world since the first printing almost one hundred years ago. The story has been adapted into film and theatre all over the United States.
On September 20th, 2001, British Prime Minister Tony Blair recited these lines in a memorial address in New York nine days after the attack on the World Trade Centre. These words of the author continue to move people by their power, grace and general importance to all.
"A witness to the deaths, wanting to make sense of them and explain the ways of God to his fellow human beings, examined the lives of the people who died, and these words were said by someone who knew the victims, and who had been through the many emotions, and the many stages, of bereavement and loss.
"But soon we will die, and all memories of those five will have left earth, and we ourselves shall be loved for a while and forgotten. But the love will have been enough; all those impulses of love return to the love that made them. Even memory is not necessary for love. There is a land of the living and a land of the dead, and the bridge is love, the only survival, the only meaning"
This English issue preceded the American published edition.

The Bridge of San Luis Rey is American author Thornton Wilder's second novel, first published in 1927 to worldwide acclaim. It tells the story of several interrelated people who die in the collapse of an Inca rope-fiber suspension bridge in Peru, and the events that lead up to their being on the bridge. A friar who has witnessed the tragic accident then goes about inquiring into the lives of the victims, seeking some sort of cosmic answer to the question of why each had to die.

We all have a worldview (don't we?) that influences just about everything we encounter. Literature is no exception. Perhaps that is why I thought the main point of Thornton Wilder's outstanding The Bridge of San Luis Rey was so obvious.In many of the reviews I've read, many have stated that Wilder leaves the main conclusion up to the reader. I must disagree. The final line, so quoted by many of the reviewers, makes it all very clear to me. "All those impulses of love return to the love that made them." Perhaps, had Wilder capitalized the second "love" more would have drawn the same conclusion as I. That love is, of course, the love of the Father. This short book is rooted in Christian realism -- summed up in that final page. Life and God's ways as they pertain to life, are a mystery to the believer. Seemingly saintly people die far too early in inexplicable circumstances-- a bridge that has lasted for centuries one day breaks under the weight of an old woman, a cripple, an old man, a young girl, and a young man. But the "why" is not for us to know. We all must live in the comfort that it is His will that reigns, not ours, and that the love which sustained us in this life will see us to the next. Perhaps Brother Juniper found his answer. I know I recognized mine.

Cloth
"Cloth-bound" generally refers to a hardcover book with cloth covering the outside of the book covers. The cloth is stretched... [More]
New
A new book is a book previously not circulated to a buyer. Although a new book is typically free of any faults or defects, "new"... [More]
gilt
The decorative application of gold or gold coloring to a portion of a book on the spine, edges of the text block, or an inlay in... [More]
spine
The outer portion of a book which covers the actual binding. The spine usually faces outward when a book is placed on a shelf.... [More]
First Edition
In book collecting, the first edition is the earliest published form of a book. A book may have more than one first edition in... [More]