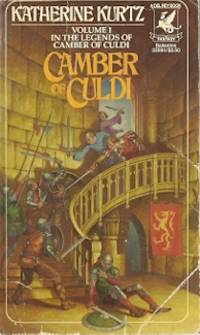 Camber of Culdi, one of the greatest Deryni sorcerors of his generation, wished nothing more than a quiet retirement to his family estates after a lifetime of service to the Crown of Gwynedd. Camber's faith and honor, though, would not in the end allow inaction.
At once cruel, oppresive, and whimsical the Festillic usurpers of that Crown thought they had utterly destroyed the rightful heirs a century before. As the kingdom grows ever more restive under the Festillic yoke, Camber comes to find that this was not quite true, after all.
In later years, Camber would be called the Defender of Humankind, Patron Saint of Deryni magic, and the restorer of the Haldane thrown. As so often happens, popular histories become distorted, often out of recognition.
This is Camber's story -- at least the first volume.; 6¾" - 7¾" Tall .

All books are subject to prior sale. We accept payment with credit cards, personal or business checks, money orders, and PayPal. We can accept credit card purchases directly or via Biblio.com's shopping cart or through PayPal. You may return a book for exchange or refund within one month of the time you receive it. Please e-mail us beforehand with the problem and we will try to resolve it to your satisfaction. For books that are not "As Described", we will pay media mail return postage.

Orielis' Books has been selling online since August, 2002. We specialize in Mystery, Science Fiction & Fantasy, Children's Books (both vintage and recent), Large Print books, and a small but growing selection of Military and general history.

spine
The outer portion of a book which covers the actual binding. The spine usually faces outward when a book is placed on a shelf....[more]
chipping
A defect in which small pieces are missing from the edges; fraying or small pieces of paper missing the edge of a paperback, or...[more]
Mass Market
Mass market paperback books, or MMPBs, are printed for large audiences cheaply.  This means that they are smaller, usually...[more]