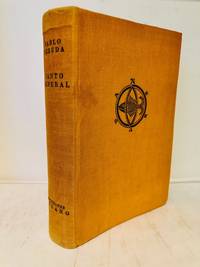 First Edition thus, following the special. signed and limited edition, in larger format, issued by Talleres Gráficos de la Nación in Mexico in the same year. This is an exact facsimile of that book in a smaller format. Crown 8vo (7 x 5 ins) pp (575); original flexible orange cloth with publisher's logo embossed on front board and black title lettering to spine. Double spread illustrated endpapers at the front and back, that at the front reproducing a painting by Diego Rivera, at the back a painting by David A. Siqueiros. Photographic frontispiece of Neruda with his signature in facsimile. An excellent and sharp copy with just a small dirty mark to the front board and a light, horizontal crease across the spine near the head, contents free of any markings or old inscriptions.

"In the Canto," (explained Duran and Safir), "Neruda reached his peak as a public poet. He produced an ideological work that largely transcended contemporary events and became an epic of an entire continent and its people." According to Alazraki, "By bringing together his own odyssey and the drama of the continent, Neruda has simultaneously given to Canto general the quality of a lyric and an epic poem. The lives of conquistadors, martyrs, heroes, and just plain people recover a refreshing actuality because they become part of the poet's fate, and conversely, the life of the poet gains new depth because in his search one recognizes the continent's struggles. Canto general is, thus, the song of a continent as much as it is Neruda's own song."

Canto General is Pablo Neruda's tenth book of poems. It was first published in Mexico in 1950, by Talleres Gráficos de la Nación. Neruda began to compose it in 1938. "Canto General" ("General Song") consists of 15 sections, 231 poems, and more than 15,000 lines. This work attempts to be a history or encyclopedia of the whole continent of Hispanic America.

Seller rating:
This seller has earned a 5 of 5 Stars rating from Biblio customers.
Biblio.co.nz member since: 2020
London, Greater London
Ask Seller a Question

At Worlds End Bookshop we offer a large and varied selection of mostly locally-sourced books on most subjects with especially strong holdings in Art, Philosophy, Travel, Jazz & Blues, and Modern First Editions. But to define us by these categories would be limiting ... we stock what we find and what we fancy, simple as.

Cloth
"Cloth-bound" generally refers to a hardcover book with cloth covering the outside of the book covers. The cloth is stretched...[more]
spine
The outer portion of a book which covers the actual binding. The spine usually faces outward when a book is placed on a shelf....[more]
facsimile
An exact copy of an original work. In books, it refers to a copy or reproduction, as accurate as possible, of an original...[more]
New
A new book is a book previously not circulated to a buyer. Although a new book is typically free of any faults or defects,...[more]
colophon
The colophon contains information about a book's publisher, the typesetting, printer, and possibly even includes a printer's...[more]