Home > Quill & Brush > THE CATCHER IN THE RYE; [Inscribed using his childhood nickname] 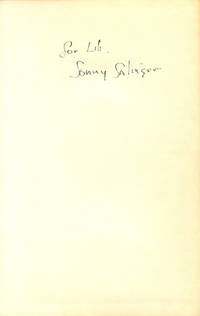 THE CATCHER IN THE RYE; [Inscribed using his childhood nickname]

THE CATCHER IN THE RYE; [Inscribed using his childhood nickname]

Boston: Little, Brown, 1951. Later book-club printing INSCRIBED BY SALINGER AS "SONNY," A CHILDHOOD NICKNAME USED ONLY WITH FAMILY AND OLD FRIENDS: "For Lili, / Sonny Salinger." We assume "Lili" was "Lili Lefforts," as we know of a Modern Library edition of NINE STORIES inscribed to "Lili Lefforts" cataloged by Ken Lopez Bookseller in 2009, at which time he stated, "It is likely that Lili was a childhood friend, probably of his parents; we have seen one other Salinger book from this period . . . inscribed as 'Sonny Salinger' and it was to the parents of a friend...." Salinger stopped using "Sonny," except with family and old friends, in his early teens. The fact that this book would have been inscribed in the 1950s or later (when he had already become a virtual recluse), lends credence to the supposition that "Lili" was a childhood friend. The value of this particular copy as a later book-club edition is insignificant. However when you take into consideration the INSCRIPTION SIGNED WITH HIS CHILDHOOD NICKNAME, it is our opinion that the value of the book becomes quite substantial. 8vo black cloth boards; gilt-stamped spine; 216 pp. In dust jacket with same front panel and spine design as the first but with rear panel blank (vs with photo of Salinger). No price at top of front flap, "Book Club Edition" at bottom; no mention of BOMC edition at bottom of rear flap but otherwise text on flaps the same as on the first edition dust jacket. [Note: this is not the Book-of-the-Month Club edition which was issued in the same format as the first but with BOMC dot on back cover and with jacket unpriced.] The book is fine with the pages clean and bright, and the dust jacket is very good with only minor soiling, a few small chips and a small skinned portion at top of front panel. Salinger inscriptions are scarce, particularly in copies of this title. A CATCHER IN THE RYE signed "Sonny Salinger" is truly rare.

Published in 1951, The Catcher in the Rye has become a common part of high school and college curricula throughout the English-speaking world and has been translated into all major languages. Since its publication with a $3.00 sticker, it has reportedly sold more than 65 million copies. The novel's antihero, Holden Caulfield, has become a cultural icon for teenage rebellion. Due to its liberal use of profanity and portrayal of sexuality and teenage angst, it has frequently been met with censorship challenges in the United States making it one of the most challenged books of the 20th century.

Read more: Identifying first editions of THE CATCHER IN THE RYE; [Inscribed using his childhood nickname]

We accept checks in U.S. dollars, as well as Visa, MasterCard, and American Express. PLEASE NOTE: All books labeled "first edition" are first printings of the first published edition. All books labeled "first U.S. edition" are first printings in the U.S. and were preceded by the "true" first edition which may have been published in England, Canada, etc. We describe condition in as much detail as reasonable. "Fine in dustwrapper" means both the book and dustwrapper are fine; any faults with the book and/or dustwrapper are noted. We offer full refunds for returns made within 30 days, when notified of return within 10 days. In-store credit for the full purchase price will be issued thereafter, but only for those books returned in the same condition as when sold.

Seller rating:
This seller has earned a 5 of 5 Stars rating from Biblio customers.
Biblio.co.nz member since: 2007
Middletown, Maryland
Ask Seller a Question

The Quill & Brush was established in 1976; we maintain a stock of approximately 12,000 books in our specialties which include first editions of American and English Literature including Mysteries and Detective Stories, Science Fiction, Children's and Illustrated Books. We also publish individual Author Price Guides on over 200 American, English and Canadian authors, which can be purchased individually or as a set; and have for sale our books on book collecting 'Book Collecting 2000: A Comprehensive Guide' and 'Collected Books: The Guide to Values' which are published by Putnam.

Cloth
"Cloth-bound" generally refers to a hardcover book with cloth covering the outside of the book covers. The cloth is stretched...[more]
First Edition
In book collecting, the first edition is the earliest published form of a book. A book may have more than one first edition in...[more]
fine
A book in fine condition exhibits no flaws. A fine condition book closely approaches As New condition, but may lack the...[more]
jacket
Sometimes used as another term for dust jacket, a protective and often decorative wrapper, usually made of paper which wraps...[more]
spine
The outer portion of a book which covers the actual binding. The spine usually faces outward when a book is placed on a shelf....[more]
flap(s)
The portion of a book cover or cover jacket that folds into the book from front to back.  The flap can contain biographical...[more]
BOMC
Book-of-the-Month Club These are popular books republished and sold at a discounted price by one of these many clubs, the...[more]
inscribed
When a book is described as being inscribed, it indicates that a short note written by the author or a previous owner has...[more]

Collecting History of the Circus in America

Step right up! Take a look at the center ring, where you will see displayed the most amazing, most colorful series of history books that the world has ever seen! Right this way, folks...