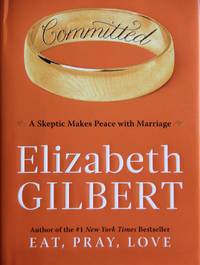 U.S.A.: Viking Adult, 2010. 1st Edition 1st Printing. Hardcover. As New/As New. 8vo - over 7¾ - 9¾" tall. At the end of her bestselling memoir Eat, Pray, Love, Elizabeth Gilbert fell in love with Felipe, a Brazilian-born man of Australian citizenship who'd been living in Indonesia when they met. Resettling in America, the couple swore eternal fidelity to each other, but also swore to never, ever, under any circumstances get legally married. (Both were survivors of previous bad divorces. Enough said.) But providence intervened one day in the form of the United States government, which-after unexpectedly detaining Felipe at an American border crossing-gave the couple a choice: they could either get married, or Felipe would never be allowed to enter the country again. Having been effectively sentenced to wed, Gilbert tackled her fears of marriage by delving into this topic completely, trying with all her might to discover through historical research, interviews, and much personal reflection what this stubbornly enduring old institution actually is. Told with Gilbert's trademark wit, intelligence and compassion, Committed attempts to "turn on all the lights" when it comes to matrimony, frankly examining questions of compatibility, infatuation, fidelity, family tradition, social expectations, divorce risks and humbling responsibilities. Gilbert's memoir is ultimately a clear-eyed celebration of love with all the complexity and consequence that real love, in the real world, actually entails.

The #1 New York Times bestselling follow-up to Eat, Pray, Love --an intimate and erudite celebration of love. At the end of her memoir Eat, Pray, Love , Elizabeth Gilbert fell in love with Felipe, a Brazilian living in Indonesia. The couple swore eternal love, but also swore (as skittish divorce survivors) never to marry. However, providence intervened in the form of a U.S. government ultimatum: get married, or Felipe could never enter America again. Told with Gilbert's trademark humor and intelligence, this fascinating meditation on compatibility and fidelity chronicles Gilbert's complex and sometimes frightening journey into second marriage, and will enthrall the millions of readers who made Eat, Pray, Love a number one bestseller.

Seller rating:
This seller has earned a 5 of 5 Stars rating from Biblio customers.
Biblio.co.nz member since: 2019
WESTBANK, British Columbia
Ask Seller a Question

Established 1983. All genres of used books.

New
A new book is a book previously not circulated to a buyer. Although a new book is typically free of any faults or defects,...[more]

One of the most influential - and certainly most iconic - cultural revolutions in American history, the Harlem Renaissance offers a compelling repertoire for both seasoned and novice book collectors. We've put together a beautiful gallery of high points to help start your collection here.

The Civil Rights Movement of the 1960s and '70s was an explosive time in American history, and it inspired explosive literature. From Malcolm X to Martin Luther King, Jr., browse some of the most collectible books from and about that era.