Home Sumner & Stillman Excerpts from INNOCENTS ABROAD; "The Luck at Roaring Camp"; in THE OVERLAND MONTHLY 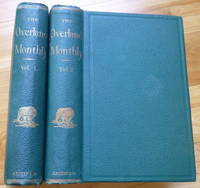 Excerpts from INNOCENTS ABROAD; "The Luck at Roaring Camp"; in THE OVERLAND MONTHLY

Excerpts from INNOCENTS ABROAD; "The Luck at Roaring Camp"; in THE OVERLAND MONTHLY

1868. Devoted to the Development of the Country. Volume I / Volume II. San Francisco: A. Roman & Company, 1868 / 1869. Original morocco-grain green cloth decorated in gilt. These two volumes contain the pre-book publication appearances of parts of Mark Twain's INNOCENTS ABROAD and also, in their entirety, of two of Bret Harte's best-known western tales -- "The Luck of Roaring Camp" and "The Outcasts of Poker Flat." These are the first two volumes (containing the first twelve issues) of The Overland Monthly -- the greatest periodical to come out of the 19th-century American West. It was established by San Francisco bookseller Anton Roman -- a Bavarian immigrant who had been part of the Gold Rush two decades earlier. He was now transitioning into publishing, having just issued a collection of California verse called OUTCROPPINGS, plus a volume of verse by Charles Warren Stoddard. The very first issue came out in July 1868, and consisted almost entirely of offerings from the "Golden State Trilogy" -- Stoddard, the new editor Bret Harte, and Ina Coolbrith (later poet laureate of California). Today these volumes are sought largely because of two major groups of contributions -- one being Bret Harte's best-known tales (cited above), which were not collected in book form until 1870. Here, "Luck" and "Outcasts" appear respectively in the August 1868 and January 1869 issues. The Overland typesetter, one Sarah Cooper, objected to typesetting passages relating to a prostitute, and this supposedly prompted a confrontation between Harte and Roman -- which was settled by the fact that Roman's wife did not object to the character in question. The other major attraction of these volumes is that in the first four issues (July through October 1868) are excerpts, picked by Harte, from Mark Twain's forthcoming second book, INNOCENTS ABROAD (which would be published about a year later, in July 1869). Twain had headed west in 1861, as his brother Orion was Secretary to the Governor of Nevada Territory; after failing at silver mining, he moved to San Francisco in 1864, where he wrote (to great acclaim) "The Celebrated Jumping Frog of Calaveras County"; acquainted with writers such as Bret Harte and Artemus Ward, Twain was also rumored to have been linked romantically with Ina Coolbrith. In 1867 a local newspaper arranged for him to go on tour to the Mediterranean -- the result of which would be INNOCENTS ABROAD. These two hefty volumes are still in the original publisher's cloth, and are in remarkably fine condition. They have a remarkable provenance: the front endpaper of each volume bears the signature "James N. Suydam," followed by "San Francisco" and the appropriate dates "December 1868" and "June 1869." Suydam had migrated from New Jersey to California in the early 1850s -- first as a merchandiser in Colusa, then as a stockbroker in San Francisco. His 12 April 1903 obituary in the San Francisco Call would be headlined "California loses another of her old pioneer founders." In all, quite a California item: THE 19th century California periodical, featuring pre-publication writings by THE early California writers -- the fine copies of an "old pioneer founder."

Seller rating:
This seller has earned a 5 of 5 Stars rating from Biblio customers.
Biblio.co.nz member since: 2009
Yarmouth, Maine
Ask Seller a Question

fine
A book in fine condition exhibits no flaws. A fine condition book closely approaches As New condition, but may lack the...[more]
Cloth
"Cloth-bound" generally refers to a hardcover book with cloth covering the outside of the book covers. The cloth is stretched...[more]
gilt
The decorative application of gold or gold coloring to a portion of a book on the spine, edges of the text block, or an inlay in...[more]
New
A new book is a book previously not circulated to a buyer. Although a new book is typically free of any faults or defects,...[more]

Take care of your old books – vintage, antiquarian, and fine – with these tips from a professional bookseller

The American Eclipse of 2017

The path of the total eclipse of August 2017 had our offices at 99% totality - we closed the office to go watch the spectacle, but first we put together this gallery inspired by eclipses to celebrate.