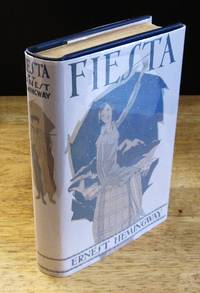 30 Bedford Square, London: Jonathan Cape , 1927. Stated at copyright: "First Published in May MMXXVII, Second Impression September MMXXVII". Bound in fine coated cloth navy boards, sharp gilt spine titles w/several bands, slight shelf wear. Pages near fine, few w/moderate discoloration; no writing. Antiquarian bookstore label inside cover: "Brentano's, Booksellers & Stationers, 37, Avenue de l'Opera, Paris". Very appropos and intriguing when considering Hemingway and the Lost Generation following WWI were creating and mingling in this very time and place of 1920's Paris. Bind fine; hinges intact. Preserved in fine facsimile of first edition wrapper; protected in new clear sleeve. Rare sharp second impression in fine first edition facsimile wrapper. Hemingway's great post-World War I novel, first major work and the classic novel of the "lost generation". A vivid exploration of the moral wasteland of Europe in the Twenties, and of the sterility and despair of postwar life. The hero, Jake Barnes, has suffered a war injury leaving him impotent. Hopelessly in love with the seductive and flamboyant Lady Brett Ashley, Jake leaves Paris to accompany Brett, her drunken fiancé, and an American boxer to Pamplona, watching as she falls for a young bullfighter. The expatriate crowd that Hemingway portrays so vividly passes their lives in an aimless alcoholic haze, against which the local fiestas and the running of the bulls seem, by contrast, full of vitality--a quality that is alien to them. The settings are romantic - the bull ring, the Paris streets, the bars, cafés and hotels - but Hemingway invests them all with a disillusion that undercuts the glamour of expatriate life. Printed in Guernsey C. I., by the Star & Gazette Co., Ltd. 286 pages. Insured post.. First Edition. Hardcover. Very Good/Fine. 8vo - over 7¾" - 9¾" tall. Book.

Fiesta: The Sun Also Rises tells the story of Jake Barnes, an expatriate living in Paris. He was wounded in World War I, and is now a journalist who spends his time drinking with other American expatriates.  The group of characters travel from Paris to Pamplona for the running of the bulls.

Satisfaction is guaranteed. Refund will be negotiated and granted for sufficient reason.

Seller rating:
This seller has earned a 5 of 5 Stars rating from Biblio customers.
Biblio.co.nz member since 2005
Rapid River, Michigan
Ask Seller a Question

We specialize in modern rarities and other hard to find materials. Items are accurately and fully described. Open communication and satisfaction is our goal.

facsimile
An exact copy of an original work. In books, it refers to a copy or reproduction, as accurate as possible, of an original... [More]
leaves
Very generally, "leaves" refers to the pages of a book, as in the common phrase, "loose-leaf pages." A leaf is a single sheet... [More]
spine
The outer portion of a book which covers the actual binding. The spine usually faces outward when a book is placed on a shelf.... [More]
shelf wear
Shelf wear (shelfwear) describes damage caused over time to a book by placing and removing a book from a shelf. This damage is... [More]
fine
A book in fine condition exhibits no flaws. A fine condition book closely approaches As New condition, but may lack the... [More]
gilt
The decorative application of gold or gold coloring to a portion of a book on the spine, edges of the text block, or an inlay in... [More]
First Edition
In book collecting, the first edition is the earliest published form of a book. A book may have more than one first edition in... [More]
New
A new book is a book previously not circulated to a buyer. Although a new book is typically free of any faults or defects, "new"... [More]
Cloth
"Cloth-bound" generally refers to a hardcover book with cloth covering the outside of the book covers. The cloth is stretched... [More]

The Importance of Dust Jackets

Is the dust jacket of a book worth holding on to? Consider its form, its function, and its beauty. Learn more about dust jackets and their importance to your collection.