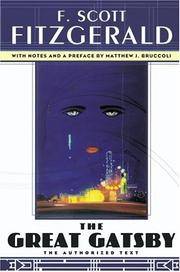 Used - Good. Former library book; may include library markings. Used book that is in clean, average condition without any missing pages.

Written in 1925, F. Scott Fitzgerald’s The Great Gatsby is widely considered to be one of the author’s greatest works. Set in New York City and Long Island during the Roaring Twenties, the focus of the story is (of course) its title character, Jay Gatsby, and his unswerving desire to be reunited with Daisy Buchanan, the love he lost five years earlier. However, Nick Carraway, who happens to be both Gatsby’s neighbor and Daisy’s cousin, narrates Gatsby's journey from poverty to wealth, into the arms of his beloved, and eventually to death. The Great Gatsby is undoubtedly one of the greatest American literary documents of the 1920s, the decade for which Fitzgerald himself coined the term “Jazz Age.” However, in writing the book, Fitzgerald was in fact holding up a mirror to the society of which he was a part. In true Modernist fashion, The Great Gatsby addresses the social issues of the period — namely materialism and displaced spirituality — that ultimately led the decline of the era. The novel’s initial sales situation was less than impressive; fewer than 25,000 copies were sold by Fitzgerald’s death in 1940. But The Great Gatsby gained great popularity during WWII as the critical mainstream began to embrace the author’s work. The Armed Services Editions circulated 150,000 copies to troops alone. Today, The Great Gatsby has sold over 25 million copies worldwide, sells an additional 500,000 copies annually, and is Scribner's most popular title. Ranked #2 on the Modern Library’s list of the 100 Best Novels of the 20th Century, the novel is also listed on their Top 100 Novels as well as The Observer’s All-Time 100 Best Novels and Time Magazine’s 100 Best Modern Novels. The Great Gatsby has resulted in a number of adaptations, including Baz Luhrmann’s 2013 major motion picture starring Leonardo DiCaprio, Tobey Maguire, Carey Mulligan, and Joel Edgerton.

The book was required reading in high school, and really overpriced, story mediocre.

Better World Books wants every single one of its customers to be happy with their purchase. If you are not satisfied your purchase or simply find out that it was not the book you were looking for, please e-mail us at: help@betterworldbooks.com. We will get back to you as soon as possible with directions on how to return the book to our warehouse. Please keep in mind that because we deal mostly in used books, any extra components, such as CDs or access codes, are usually not included. CDs: If the book does include a CD, it will be noted in the book's description ("With CD!"). Otherwise, there is no CD included, even if the term is used in the book's title. Access Codes: Unless the book is described as "New," please assume that the book does *not* have an access code.

Seller rating:
This seller has earned a 5 of 5 Stars rating from Biblio customers.
Biblio.co.nz member since 2010
Reno, Nevada
Ask Seller a Question

Not everyone has access to a book the way you do, which is why Better World Books cares. We have donated millions of books and raised millions of dollars to support literacy, libraries and education. Every Better World Books purchase you make contributes. Oh yeah, great prices, fast delivery, unique titles and a generous return policy - we’ve got that too. Thank you for shopping with us!

Classic supernatural fiction is distinct from contemporary horror because it is more literate and often relies upon poetic subtlety rather than unpleasant gratuity to create an atmosphere. Enter if you dare!

Teeny, tiny, beautiful books...the world of miniature books is one that involves a lot of imagination and craftsmanship. Dive in and see!