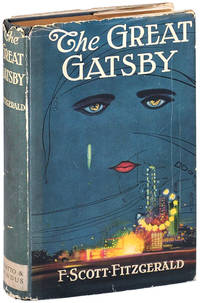 London: Chatto & Windus, 1926. First U.K. Edition. The first English edition of Fitzgerald's third novel and most enduring work, the story of a flamboyant racketeer's attempt to recapture the upper-class girl he fell in love with during the waning years of World War I. While hailed for many decades as an American classic, Gatsby was a commercial disappointment during its time; its two printings totaled 23,870 copies, and at the time of Fitzgerald's death in 1940, stacks of them still remained unsold in the Scribner's warehouse.

The UK edition of Gatsby was published from the American plates of the second Scribner's edition, which incorporated corrections to the six textual errors in the first state of the text. Fitzgerald, eager for a better literary reputation in England than he ever enjoyed, was disappointed when his primary publisher, William Collins, turned down the opportunity to publish Gatsby, stating that to published the novel "would be to reduce the number of his readers rather than to increase them." Chatto & Windus would publish the novel in a print run a fraction of the size of the Scribner's edition. In his introduction to New Essays on The Great Gatsby, Matthew Bruccoli notes that "The English impact was negligible. The 1926 Chatto & Windus printing did not sell well, although reviews were better than those Fitzgerald's previous novels had received in England. The Times Literary Supplement called it "undoubtedly a work of art and of great promise"; Edward Shanks in the London Mercury commended the author's control over his material. Conrad Aiken, writing in The New Criterion, praised the form and originality of the novel but stated that it is not "great," "large," or "strikingly subtle" (pp.3-4).

Considerably scarcer than its American counterpart, with no jacketed examples found in the auction record, and OCLC noting a scant 20 holdings (of these, only 13 in U.S. institutions). Bruccoli A11.1.c.; Sutherland & Connell. The Connell Guide to F. Scott Fitzgerald's The Great Gatsby (2010), p.64; Connolly 48. First Impression (from American plates), one of 3,000 copies. Octavo (19.25cm); primary binding in dark blue V cloth, with titles stamped in gilt on spine; dustjacket; [vi],218pp. Hint of a forward lean, gentle sunning to spine, with some scattered foxing to text edges, preliminary, and terminal leaves; hinges sound; Very Good+. In the Francis Cugat dustjacket, the second issue, with the original 7s. price clipped by the publisher, and the shadow of the new price sticker directly above; gently spine-sunned, lightly edgeworn, with some rubbing to spine ends, joints, and flap folds; minute loss to upper corner-tips, a few tiny tears, with shallow loss to crown, affecting the "T" in "The;" small area of loss skillfully and professionally restored at upper front panel (2 5/8" by 3/4", affecting parts of "The" and the "Gr" in the title); Very Good+. Housed in a custom half-morocco clamshell case.

Written in 1925, F. Scott Fitzgerald’s The Great Gatsby is widely considered to be one of the author’s greatest works. Set in New York City and Long Island during the Roaring Twenties, the focus of the story is (of course) its title character, Jay Gatsby, and his unswerving desire to be reunited with Daisy Buchanan, the love he lost five years earlier. However, Nick Carraway, who happens to be both Gatsby’s neighbor and Daisy’s cousin, narrates Gatsby's journey from poverty to wealth, into the arms of his beloved, and eventually to death. The Great Gatsby is undoubtedly one of the greatest American literary documents of the 1920s, the decade for which Fitzgerald himself coined the term “Jazz Age.” However, in writing the book, Fitzgerald was in fact holding up a mirror to the society of which he was a part. In true Modernist fashion, The Great Gatsby addresses the social issues of the period — namely materialism and displaced spirituality — that ultimately led the decline of the era. The novel’s initial sales situation was less than impressive; fewer than 25,000 copies were sold by Fitzgerald’s death in 1940. But The Great Gatsby gained great popularity during WWII as the critical mainstream began to embrace the author’s work. The Armed Services Editions circulated 150,000 copies to troops alone. Today, The Great Gatsby has sold over 25 million copies worldwide, sells an additional 500,000 copies annually, and is Scribner's most popular title. Ranked #2 on the Modern Library’s list of the 100 Best Novels of the 20th Century, the novel is also listed on their Top 100 Novels as well as The Observer’s All-Time 100 Best Novels and Time Magazine’s 100 Best Modern Novels. The Great Gatsby has resulted in a number of adaptations, including Baz Luhrmann’s 2013 major motion picture starring Leonardo DiCaprio, Tobey Maguire, Carey Mulligan, and Joel Edgerton.

The book was required reading in high school, and really overpriced, story mediocre.

Not even his third best book, and one of the most overblown pieces of literature ever written. Critics and high-school teachers have turned what is essentially an interesting period piece into one of the unquestioned giants of literature. Try Tender is the Night.

Seller rating:
This seller has earned a 5 of 5 Stars rating from Biblio customers.
Biblio.co.nz member since 2010
Stephenson, Virginia
Ask Seller a Question

gilt
The decorative application of gold or gold coloring to a portion of a book on the spine, edges of the text block, or an inlay in... [More]
spine
The outer portion of a book which covers the actual binding. The spine usually faces outward when a book is placed on a shelf.... [More]
New
A new book is a book previously not circulated to a buyer. Although a new book is typically free of any faults or defects, "new"... [More]
octavo
Another of the terms referring to page or book size, octavo refers to a standard printer's sheet folded four times, producing... [More]
price clipped
When a book is described as price-clipped, it indicates that the portion of the dust jacket flap that has the publisher's... [More]
first state
used in book collecting to refer to a book from the earliest run of a first edition, generally distinguished by a change in some... [More]
good+
A term used to denote a condition a slight grade better than Good.
rubbing
Abrasion or wear to the surface. Usually used in reference to a book's boards or dust-jacket.
Cloth
"Cloth-bound" generally refers to a hardcover book with cloth covering the outside of the book covers. The cloth is stretched... [More]
edges
The collective of the top, fore and bottom edges of the text block of the book, being that part of the edges of the pages of a... [More]