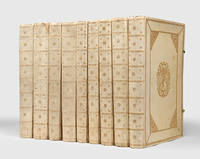 Amsterdam: Johannes Blaeu, , 1664. The greatest and finest atlas ever published" 9 volumes, folio (510 x 335 mm). Original publisher's vellum, smooth spines divided by nine gilt foliate rolls, central rose motifs, fleur-de-lis ornamentation to corners of compartments, sides panelled in gilt with central device of Atlas holding a celestial globe within an ornate foliate cartouche, green silk ties (some loose, a few missing). 600 engraved maps coloured by a contemporary hand and heightened with gold throughout; vol. II, map 9 "Marchionatus Brandenburgici partes duae, Nova Marchia et Uckerana" supplied from another copy of a different edition. Vol. I, half-title "Aerdkloots-bescryving" with vertical creasing and 50 mm horizontal tear in lower margin due to paper flaw, but without loss, world map and a few others lightly creased at central fold; Vol. II, repair to top margin of text leaf B1, map 12 "Ducatus Brunsvicensis" with large vertical taped repair on verso, tiny hole with old repair in border of map 78 "Territorii Novoforensis", map 82 "Sveviae Nova Tabula" with short repair to vertical fold, folding map 94 "Alsatia Landgraviatus" spotted with brown ink, a few text leaves lightly browned); Vol. III, map 19 "Episcopatus Gandavenis" with repaired tear into image, some browning to text leaves towards end; Vol. IV, light browning to maps 53 and 54 of Westmorland and Cumberland; Vol. V, some browning affecting the preliminary text leaves as well as maps 7 and 17 which are both also creased; Vol. VI, large folding map "Imperii Caroli Magni" browned with some old repairs and tiny holes mainly at crease folds, browning to map 60 and 5 text leaves; Vol. VIII, light browning to the Africa part, tiny split to central fold of map 31 "Melite Insula", some light creasing along vertical central folds more heavily affecting map 40 "Aethiopia Inferior"; Vol. IX, some light spotting and browning throughout, index leaf with 50 mm marginal tear repaired on verso. Notwithstanding these minor flaws, excellent condition overall. A particularly handsome set of "the greatest and finest atlas ever published" (Koeman). The Atlas Major as initially published in its various editions was the largest atlas ever published, the epitome of decades of achievement by the Blaeu family and published in five languages (Latin, Dutch, French, German, and Spanish). It was justly famed for its production values, its high typographic standard, and the quality of its engraving, ornamentation, binding and colouring. The atlas frequently served as the official gift of the Dutch Republic to princes and other authorities. It is one of the most lavish and highly prized of all 17th-century illustrated books, the maps embellished in the baroque style, many ranking among the most beautiful ever made. "The contents of this unprecedented atlas illustrate the high standards of contemporary cartography and geographical knowledge, and its presentation bears witness to the superb craftsmanship of engraver, printer, binder and papermaker  The costly atlas was in fact exclusively designed for those members of the patriciate who could command both the material and intellectual resources that were needed to buy it and appreciate it" (ibid.). This present example is the Dutch edition, arranged quite differently from the Latin or French editions. It has its origins in Willem Blaeu's intention to publish a new 'international edition' of a world atlas, which was first announced on 11 February 1634 in an Amsterdam newspaper, the Courante uyt Italien ende Duytschlandt. This was a two-volume atlas published in four languages, with the German edition first to appear in 1634, and the Latin, Dutch, and French appearing in 1635. The first part of its Latin title, Theatrum Orbis Terrarum, deliberately echoed the previous efforts of Abraham Ortelius, while the following part of the title, Atlas Novus, emphasized that this was a new publication at the cutting-edge of cartographic knowledge. Willem planned two additional volumes, but these were only completed after his death, in 1640 and 1645. Willem's son, Jan, progressively expanded the Atlas Novus to six volumes by 1655, and this formed the first half of the Atlas Major. The Dutch edition, entitled Toonneel des Aerdrycks (Theatre of the World), is the most complicated in make-up, with the text being reset at least four times. Since it was the basis for the Grooten Atlas (Atlas Major) this has led to quite a different composition from the other language editions. For instance, while the Latin editions carry a uniform date, the present set varies considerably, with volumes I-III and IX dated 1664 and volume VII undated, while volumes IV-VI reuse Toonneel titles and are dated 1648, 1654, and 1650 respectively. As Van der Krogt explains: "Joan Blaeu probably had a large stock of printed sheets of his latest Toonneel des Aerdrycks and did not want to discard them, nor to change in manuscript all the signatures and map numbers. Therefore he gave the maps, which were appearing in the Grooten Atlas for the first time, signatures and numbers which fitted them into those of the Toonneel... In this way volumes I to III of the Grooten Atlas are compiled from volume I of the Toonneel; volume VI from part I of volume II of the Toonneel; volume VII from volume III; volume VIII from part II of volume II (except Asia); and volume IX from the maps of Asia part II of volume II, to which the atlas of China (volume VI of the Toonneel) was added. Volumes IV and V are identical to their corresponding volumes of the Toonneel" (II, p. 383). The present set seems to be one of the early variants identified by Van der Krogt, updating early editions of volumes IV, VII and IX from the Toonneel (see Van der Krogt II, p. 383). Cornelis Koeman, Joan Blaeu and his Grand Atlas, George Philip (1970).

All major credit cards are accepted. Both UK pounds and US dollars(exchange rate to be agreed) accepted. Books may be returned within 14 days of receipt for any reason, please notify first of returned goods.

Seller rating:
This seller has earned a 5 of 5 Stars rating from Biblio customers.
Biblio.co.nz member since:
London
Ask Seller a Question

Peter Harrington is currently offering a normal national and international delivery service unaffected by COVID-19. Peter Harrington first started selling rare and antiquarian books from the Chelsea Antiques Market on London's King's Road in 1969, and have since grown to become one of the largest and best known antiquarian bookshops in Europe. Our shop extends over four floors offering up to 20,000 volumes. We also offer a full bookbinding and restoration service, and are members of the ABA and ILAB.

vellum
Vellum is a sheet of specialty prepared skin of lamb, calf, or goat kid used for binding a book or for printing and writing. ...[more]
verso
The page bound on the left side of a book, opposite to the recto page.
leaves
Very generally, "leaves" refers to the pages of a book, as in the common phrase, "loose-leaf pages." A leaf is a single sheet...[more]
gilt
The decorative application of gold or gold coloring to a portion of a book on the spine, edges of the text block, or an inlay in...[more]
folio
A folio usually indicates a large book size of 15" in height or larger when used in the context of a book description....[more]
device
Especially for older books, a printer's device refers to an identifying mark, also sometimes called a printer's mark, on the...[more]
New
A new book is a book previously not circulated to a buyer. Although a new book is typically free of any faults or defects,...[more]

This gallery is dedicated to some of the best fiction and nonfiction portraying one of the greatest cities in the world. We Heart NYC!  Enjoy browsing these books on New York City.

Rare books > ABA Featured Books > More Rare Books from Peter Harrington
Yes, we have a new look!
Let us know what you think.