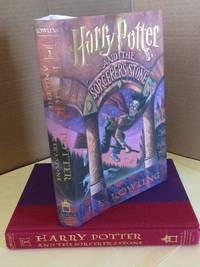 Harry Potter and the Sorcerer's Stone

Harry Potter and the Sorcerer's Stone

Scholastic Press, 1998 Rowling (1965-) and Harry Potter need no introduction. The sale item is the first book in the famous series, published by Scholastic Press with illustrations by Mary Grandpre. Stated first American edition from October 1998 but a late, late printing. Number line reads: 35 34 33 32 30 then 9/9 0/0 01 02; the next line reads Printed in USA and then 45. The third line reads First American edition 1998. Purple paper boards with blind stamped lines creating a diamond pattern; red cloth at spine. Gold lettering on spine only. Binding tight and square, clean and bright. Unclipped dust jacket shows a price of $17.95. Jacket has no flaws. 309 pages.

THIS IS A WONDERFUL BOOK. THE BEST BEGINNING FOR THE BEST SERIES EVER WRITTEN.

All books can be returned within 10 days of receipt if not received as described. Please alert via email prior to return.

Seller rating:
This seller has earned a 5 of 5 Stars rating from Biblio customers.
Biblio.co.nz member since: 2004
grafton, Wisconsin
Ask Seller a Question

J. Vint Books...rare, collectable, and lightly used. We are and online bookstore specializing in collectible editions of used and rare fiction, mystery, poetry and young adult literature plus non-fiction in the areas of religion and philosophy, biography, history, and the arts. We love books, obviously for their content, but also for their appearance. What we well reflects those interests. We can be contacted at jvintbooks@wi.rr.com or by phone at 262-914-7020. If no answer, please leave a message and we will get back to you.

Cloth
"Cloth-bound" generally refers to a hardcover book with cloth covering the outside of the book covers. The cloth is stretched...[more]
spine
The outer portion of a book which covers the actual binding. The spine usually faces outward when a book is placed on a shelf....[more]
tight
Used to mean that the binding of a book has not been overly loosened by frequent use.
number line
A series of numbers appearing on the copyright page of a book, where the lowest number generally indicates the printing of that...[more]
jacket
Sometimes used as another term for dust jacket, a protective and often decorative wrapper, usually made of paper which wraps...[more]

How to tell if a signature is genuine

Author's signatures can undoubtedly increase the value of a rare book or first edition. The more scarce the book is, the more an autograph adds to its value. But how to tell if the signature is real? Find out how you can avoid common pitfalls in identifying an author's signature.

George Psalmanazar played a grand prank in 1703, pretending to be a resident of the island of Formosa. His book took London by storm.  Learn more...