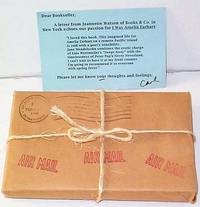 I Was Amelia Earhart

I Was Amelia Earhart

Jane Mendelsohn was born in New York City, July 4, 1965. She was graduated summa cum laude, Phi Beta Kappa, from Yale University in 1987, and attended Yale Law School for one year before beginning a career as a writer/journalist. In 1992, Ms. Mendelsohn spotted an article in The New York Times about the discovery of a piece of a plane believed to have been Amelia Earhart's. The article mentioned that Earhart traveled with a navigator, Fred Noonan, who was with her on her last flight. Intrigued by the dramatic possibilities of two people flying around the world together, crashing, and perhaps surviving, she began researching Earhart's life and disappearance. Shortly after, Ms. Mendelsohn began sketching out a book based on her findings. The first version was a much longer book, told entirely in the third person. "Once I finished it," Ms. Mendelsohn says, "I realized that I had only just figured out the story. Now that I knew what had happened, I had to tell it in Earhart's, and my, voice." The result is I Was Amelia Earhart . Harper's Bazaar hails I Was Amelia Earhart as "an immediately addicting book, as telegraphic as those of Margaret Duras, and as charged with longing....not to be missed." The New York Times writes, "Ms. Mendelsohn has chosen to use the bare-boned outlines of the aviator's life as an armature for a poetic meditation on freedom and love and flight. I Was Amelia Earhart , like Gabriel Garcia Marquez's General in His Labyrinth , invokes the spirit of a mythic personage, while standing on its own as a powerfully imagined work of fiction." I Was Amelia Earhart is Ms. Mendelsohn's first book and novel. Ms. Mendelsohn's reviews have appeared in The Philadelphia Inquirer, The Village Voice, The Guardian, The London Review of Books , and Yale Review . She has worked as an assistant to the literary editor at The Village Voice and as a tutor at Yale University. At the moment, Ms. Mendelsohn is writing a horror film. She is also sketching out details for her next novel. Ms. Mendelsohn is married and lives in New York with her husband, filmmaker Nick Davis.

Items may be returned within 30 days of receipt. All our items are guaranteed authentic and in the condition described. If we made an error in our listing, we will pay the return shipping expense. All major credit cards are accepted via biblio.com; we also accept personal checks and money orders.

Seller rating:
This seller has earned a 4 of 5 Stars rating from Biblio customers.
Biblio.co.nz member since: 2003
Norwalk , California
Ask Seller a Question

Many of us love giving and receiving holiday cards - but did you know many of them are highly collectible? Whether signed by famous authors or just beautiful to look at, these collectible Christmas cards are sure to put a twinkle in your eye.

Nothing quite whets the appetite for rare and collectible books like old and vintage cookbooks. Be sure to check out our cook books and food section of our rare book room.