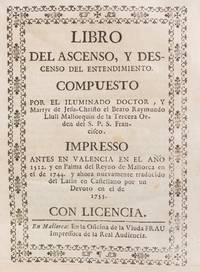 Mallorca: En la Oficina de la Viuda Frau 1753, 1753. First vernacular edition. 4to. 195x140mm. pp.[viii], [2] plates, 252. Folding table of contents and folding woodcut illustration preceding A1, woodcut vignettes to text. Title-page trimmed and extended at lower margin (probably to erase inscription), a couple of pages lightly browned. Contemporary Spanish limp vellum, title in ink to spine, lacking ties. Some internal cracking at the hinges and the usual warping. An excellent copy of a very rare book. First vernacular edition. The Catalan philosopher and missionary Llull (c.1232c.1316) is best known for his 'great art', a theory of logic which, he believed, united all strands of knowledge under one universal method. This elaborate, mystically inspired universal system of knowledge was intended to convert unbelievers. The present text is a pre?guration, written in 1304, of his grand theory elaborated a year later in the Ars magna. It proposes that there is a 'ladder of understanding' of eight entities and twelve questions, representing the hierarchy of Creation through which the intellect can arrive at knowledge of each entity. This process is illustrated and tabulated in the two plates preceding the text; the illustration exempli?es Llull's use of the ?gure of the wheel, for which he became famous. First published in Valencia in 1512, the Liber de ascensu et descensu intellectus (as it was entitled in Latin) was republished in the city of Llull's birth, Palma de Mallorca, in 1744. This Spanish translation followed soon afterwards. Sarton, G., Introduction to the History of Science, 3 vols, Baltimore 192748, ii 908; DSB: Dictionary of Scientific Biography, 16 vols, New York 1981, viii 54751.

Seller rating:
This seller has earned a 5 of 5 Stars rating from Biblio customers.
Biblio.co.nz member since: 2018
Holt, Norfolk
Ask Seller a Question

Simon Finch has been a Rare Book Dealer since 1980. He has had shops in Notting Hill Gate, Mayfair and Holt, Norfolk. His firm has handled a wide variety of material from the First Folio of Shakespeare to the wilder shores of the counterculture and everything in between. In 1998, Simon bought Voewood, one of the finest Arts and Crafts and houses and brought it back to life with an eight-year programme of renovation and restoration. Voewood Rare Books, which operates from Voewood, is the continuation for Simon of a long career in the book trade. It also represents an important link with the House. Voewood is always beautiful, surprising, mysterious and perhaps a little disorientating and we aim to bring something of this spirit to the bookshop. Whilst our focus in on the visual arts, literature and the counter-culture, we deal also in a broad range of antiquarian and modern rare books across all subject areas. Our collection can be found here at Biblio and on our website. We are open by appointment and can always be contacted by email.

vellum
Vellum is a sheet of specialty prepared skin of lamb, calf, or goat kid used for binding a book or for printing and writing. ...[more]
spine
The outer portion of a book which covers the actual binding. The spine usually faces outward when a book is placed on a shelf....[more]
New
A new book is a book previously not circulated to a buyer. Although a new book is typically free of any faults or defects,...[more]
G
Good describes the average used and worn book that has all pages or leaves present. Any defects must be noted. (as defined...[more]

These iconic children's board books are collectible if you can find an original in great condition! Learn more about collecting Little Golden Books.