Rare books Wild Animals More Rare Books from Hordern House Rare Books Natural History of Victoria. Prodromus of the zoology of Victoria; or, figures and descriptions of the living… 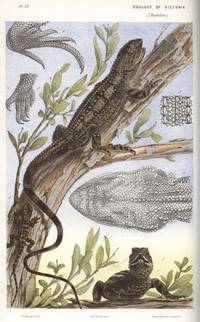 Natural History of Victoria. Prodromus of the zoology of Victoria; or, figures and descriptions of the living classes of the Victorian indigenous animals

Natural History of Victoria. Prodromus of the zoology of Victoria; or, figures and descriptions of the living classes of the Victorian indigenous animals

A superb copy of this beautifully illustrated work. McCoy's book has been a somewhat overlooked classic of Australian natural history, representing the culmination of nineteenth-century scholarship in the field.

Irish-born Frederick McCoy arrived in Melbourne in 1854 to take up the first Professorship of Natural Science at the newly-formed University of Melbourne. For the next forty years he was at the centre of colonial scientific life. He became the first Director of the newly formed National Museum of Victoria and was responsible for the rapid development of the Museum and its collection.

McCoy 'built up an outstanding natural history and geological collection, including mining models, exploiting his knowledge of overseas sources. In 1870 the Museum [of Natural and Applied Sciences, Melbourne] was placed under the Public Library trustees... Ever pestering for funds and uncovering trustees' plots to move the museum, he found his best defence and consolation in the popularity and scientific standing of the museum. Annual attendances averaged 53,000 in the 1860s, 95,000 in the 1870s, 110,000 in the 1880s and 108,000 in the 1890s. Painfully he acquired government money to publish serially his Prodromus of the Zoology of Victoria (1878-90) and Prodromus of the Palaeontology of Victoria (1874-82)' (ADB).

There has been a recent resurgence of interest in McCoy's work, notably with the important exhibition and online catalogue of the Prodromus, 'Caught & Coloured, Zoological Illustrations from Colonial Victoria' at the Melbourne Museum (see http://museumvictoria.com.au/caughtandcoloured).

14 day return guarantee, with full refund including original shipping costs for up to 14 days after delivery if an item arrives misdescribed or damaged. For full terms please visit our website.

Hordern House, founded by Anne McCormick and Derek McDonnell in 1985 and named for our original building in Sydney's Potts Point, is an internationally renowned dealership, specialising in rare books, manuscripts and paintings.Nowadays we conduct our business in the heart of Surry Hills, five minutes from the centre of Sydney. We occupy an entire floor of a converted warehouse where we have created a customised environment for our work and the display of rare books, manuscripts & paintings.Always reflected in our extensive stock of rare and select material is our specialization in voyages and travels (with a special interest in the Pacific & Australia), natural history and colour-plate material, paintings and voyage art, historical maps and manuscripts.

calf
Calf or calf hide is a common form of leather binding.  Calf binding is naturally a light brown but there are ways to treat...[more]
gilt
The decorative application of gold or gold coloring to a portion of a book on the spine, edges of the text block, or an inlay in...[more]
octavo
Another of the terms referring to page or book size, octavo refers to a standard printer's sheet folded four times, producing...[more]

The Beat Generation was born out of WWII, and it still continues to exert considerable influence on today's literary scene. Biblio sellers have a fantastic collection of Beat Generation books and ephemera for browsing.