Join us June 2–June 4, 2022 for our second virtual antiquarian book fair!
Preregister now for Biblio.live and get $10 to use at the fair.
Home Rare Books Presidential and Celebrity Signatures More Rare Books from Between the Covers Rare Books, Inc. ABAA Neilson's Greek Exercise. Abridged and Revised in Syntax, Ellipsis, Dialects, Prosody, and Metaphrasis; To Which… 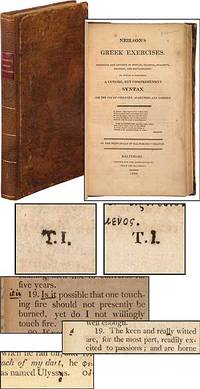 Neilson's Greek Exercise. Abridged and Revised in Syntax, Ellipsis, Dialects, Prosody, and Metaphrasis; To Which is Prefixed, a Concise, but Comprehensive Syntax for the Use of Colleges, Academies and Schools. By the Principals of Baltimore College

Neilson's Greek Exercise. Abridged and Revised in Syntax, Ellipsis, Dialects, Prosody, and Metaphrasis; To Which is Prefixed, a Concise, but Comprehensive Syntax for the Use of Colleges, Academies and Schools. By the Principals of Baltimore College

Baltimore: Printed for the Proprietors by Swain & Matchett, 1809. Hardcover. Good. First American edition (the book was first printed in Edinburgh, 1806). Octavo. pp. viii, 171, [1]. Text in Greek and English. Contemporary full mottled calf, recased and with a 20th Century rebacking in morocco, old red morocco label preserved on the spine, edges worn, good and sound. Thomas Jefferson's copy, with his block initial marks at signature I ("T"), and at signature T ("I"), and with approximately 42 corrections and emendations in his hand in the text over 32 different pages. Most of the corrections amend the spelling of Greek words by crossing out or underlining the improper letter, and inserting in the margin the correct letter. Many of the corrections are to the Greek, but several also correct errors in the English, such as where he has corrected "Ulyssus" to read "Ulysses" by crossing out the "u" and inserting the "e," or inverting "Is it" to "It is" in a declarative sentence. All the corrections are listed in an errata at the back, and the story goes, though not yet confirmed, that the book was corrected for his daughter who was at the time studying Greek. Jefferson's use of block initials at signatures I and T began in 1815 after the sale of his so-called Great Library to the Library of Congress; prior to 1815 his books were marked with cursive initials. Poor, Nathaniel P., *Catalogue. President Jefferson's Library*, 1829, no 851; see also Bear, James A., Jr., *Thomas Jefferson's Book-Marks*, Charlottesville, 1958; "Jefferson, the Book Collector," in *The Quarterly Journal of the Library of Congress*, Vol. 29, No.1, January, 1972, p.32-48. Ex-Cal Otto.

All books are first editions unless otherwise noted. All books are returnable within ten days if returned in the same condition as sent. We accept VISA, MASTERCARD, AMERICAN EXPRESS, DISCOVER, PAYPAL, checks and money orders. New Jersey residents please add 7% sales tax. All items guaranteed, all items subject to prior sale. Members ABAA, ILAB. Shipping is $4 for Media Mail, $5 for Priority Mail or UPS Ground. Orders sent UPS will have tracking emailed to you. Alternate shipping available by request. Shipping costs are based on books weighing 2.2 LB, or 1 KG. If your book order is heavy or oversized, we may contact you to let you know extra shipping is required. Any book over $200 must be sent UPS or Priority Mail.

About Between the Covers- Rare Books, Inc. ABAA

Between the Covers-Rare Books, Inc., founded in 1985, specializes in first editions of 20th Century American and English fiction. Our inventory of over 75,000 first editions includes: African-American literature & history, Mysteries, Detective Fiction, Drama, Books into Film and Sports books. We routinely issue extensively illustrated color catalogs, available by subscription. We are members of the Antiquarian Booksellers' Association of America (ABAA)and the International League of Antiquarian Booksellers (ILAB). Tom Congalton, founder of Between the Covers-Rare Books, Inc., actively promotes the ethics and standards of these professional organizations and served as President of the ABAA from 2000 to 2002.

spine
The outer portion of a book which covers the actual binding. The spine usually faces outward when a book is placed on a shelf.... [More]
calf
Calf or calf hide is a common form of leather binding. Calf binding is naturally a light brown but there are ways to treat the... [More]
Poor
A book with significant wear and faults. A poor condition book is still a reading copy with the full text still readable. Any... [More]
morocco
Morocco is a style of leather book binding that is usually made with goatskin, as it is durable and easy to dye. (see also... [More]
errata
Errata: aka Errata Slip A piece of paper either laid in to the book correcting errors found in the printed text after being... [More]
octavo
Another of the terms referring to page or book size, octavo refers to a standard printer's sheet folded four times, producing... [More]
edges
The collective of the top, fore and bottom edges of the text block of the book, being that part of the edges of the pages of a... [More]

Read through our tips, hints, and information on collecting books signed or inscribed by the author or illustrator.

Plague journals, escapist literature, political history: explore our year in review, where we share rare book trends and a gallery of some of the most beautiful and interesting books sold in 2020.