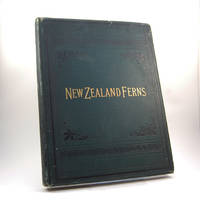 Dunedin, NZ, [late 1870s or 1880s]. Tall quarto (370 x 280mm). Original green cloth, upper board blocked in gilt and black. The contents comprise approximately 56 fern specimens mounted on the rectos of 16 card leaves with scientific names in manuscript, the leaves bound in on linen stubs. Maker's ticket to the front pastedown. Some wear and small bumps, and spots and marks to the binding, contents toned. 4 of the specimens are loose or have a small piece that has come loose, but are still retained, one specimen is lacking a frond. Very good condition. A rare, sixteen-page album of artistically arrayed and scientifically labeled New Zealand ferns by the award-winning botanical artist and entrepreneur Mary Ann Armstrong, known commercially as "Mrs. C. C. Armstrong" (1838-1910). This is a nice example of Armstrong's work, which is notable for its elegant presentation, including the use of symmetry and sweeping arcs, and the ingenious placement of moss to "ground" the specimens. Each page is an artwork unto itself, usually featuring between three and six large fronds accompanied by carefully chosen smaller samples, all given scientific labels in a large and neat hand. The ferns in this volume are generally in excellent condition, clearly professional prepared and maintaining their fine details and sense of vitality. Historian Molly Duggins, of the National Art School, Sydney, has done important work on Armstrong, providing a deep understanding of her work within the contexts of the international fern trade and the economic and cultural landscape of colonialism. She explains that, beginning in the mid-nineteenth century, a craze for ferns swept Britain and its colonies, providing "a form of popular rational amusement that was intimately linked to scientific progress and colonisation" and that "held special significance for the colonies where the plethora of local species became a symbol of proto-nationalistic pride" (Duggins, "Mary Ann Armstrong", Design & Art Australia Online, 2011). In New Zealand and Australia ferns became a major commercial industry encompassing both living plants and artistically arranged pressed specimens. "Few women, however, engaged in the New Zealand fern industry as a significant and sustained business venture. The fern work produced by Mary Ann Armstrong is distinctive in this regard" (Duggins, "The world's fernery: New Zealand, fern albums, and nineteenth-century fern fever", New Zealand's Empire, p. 108). Armstrong was born in Birmingham and emigrated to Australia in 1853. Five years later she married Charles Clark Armstrong and in the early 1860s the couple moved to Dunedin, but Charles's business ventures fared poorly and it may be that Mary, who was developing a serious interest in ferns, began selling pressed specimens to supplement the family's income (in total there would be eleven children to feed). "Active from roughly the late 1870s to the 1890s, her body of work revolves around the artistic arrangement and scientific notation of ferns in albums and framed compositions, sometimes composed into decorative, collage-like landscapes". (Dugins, "Mary Ann Armstrong"). Though they don't feature in this particular album, she frequently incorporated photographs of the New Zealand landscape and the indigenous Maori, depicting an exoticised New Zealand "cloaked under the mantle of romantic botanical tourism" (Duggins, "The world's fernery", p. 113). In addition to albums, Armstrong produced ferns mounted on postcards and paper goods with fern transfers, supplying them to local booksellers and fancy goods shops. Other family members were involved in this extensive enterprise; when Armstrong and her husband moved to Melbourne in 1887 her son Charles remained in Dunedin, where he worked as a "scenic photographer and fern artist". He imported ferns and fern products to Australia, and also supplied them to his mother, whose business remained active until the mid 1890s (Duggins, "Mary Ann Armstrong"). Though Armstrong's work stemmed from the 19th-century culture of domestic botanical art, Duggins argues that it is, "distinct from this feminine tradition in that it was displayed alongside the work of men at a series of international and intercolonial exhibitions from 1879-89... Moreover, her work was unabashedly commercial: unlike the domestic arts which were largely created and displayed within the home, Mary Ann marketed and sold her fern compositions to the general public. As an entrepreneur, she relied upon the reputation she established through her commendable exhibition record". And "rather than wholly succumbing to decoration, a majority of Mary Ann's compositions retained a strong scientific element that was firmly grounded in the systematic notation of each specimen. The classificatory fluctuation of her entries from horticulture to fancy goods at international exhibitions reflects this duality, indicating that her compositions straddled the divide between art and science." (Duggins, "Mary Ann Armstrong") Armstrong's albums are rare in commerce, appearing at auction only three times in recent decades (Dominic Winter in 2011 and 2008, and Christies in 2008). Institutionally, they are mainly represented in Australasian institutions: the National Library of New Zealand, the Universities of Wellington and Waikato, the National Library of Australia, and the State Libraries of New South Wales and Victoria. Examples are also held at Harvard, the University of Georgia, and UCLA.

Seller rating:
This seller has earned a 5 of 5 Stars rating from Biblio customers.
Biblio.co.nz member since: 2018
Aberlour, Moray
Ask Seller a Question

We specialise in rare science books dating from the late Middle Ages to the 20th century, including first editions, signed copies, manuscripts, objects, and ephemera. We have particular expertise in natural history, genetics and evolution, anatomy, nuclear physics and the Manhattan Project, early computing, and women in science. We also carry books related to women's history and literature.

Cloth
"Cloth-bound" generally refers to a hardcover book with cloth covering the outside of the book covers. The cloth is stretched...[more]
quarto
The term quarto is used to describe a page or book size. A printed sheet is made with four pages of text on each side, and the...[more]
New
A new book is a book previously not circulated to a buyer. Although a new book is typically free of any faults or defects,...[more]
Bumps
Indicates that the affected part of the book has been impacted in such a way so as to cause a flattening, indention, or light...[more]
fine
A book in fine condition exhibits no flaws. A fine condition book closely approaches As New condition, but may lack the...[more]
leaves
Very generally, "leaves" refers to the pages of a book, as in the common phrase, "loose-leaf pages." A leaf is a single sheet...[more]
gilt
The decorative application of gold or gold coloring to a portion of a book on the spine, edges of the text block, or an inlay in...[more]