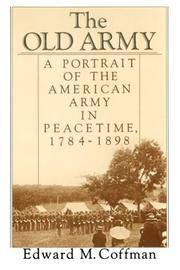 Cary, North Carolina, U.S.A.: Oxford Univ Pr, 1988. 514pp/maps/illus. Study of the 19th Century peacetime army. The only comprehensive study of the people who made up the garrison army in the peacetime intervals between the War for Independence and the Spanish-American War. Light rubbing to dj. Clean and tight.. 1st Printing. Cloth. Near Fine/Very Good++. 8vo - over 7¾" - 9¾" tall.

Books may be returned within 7 days if not satisfied.

Seller rating:
This seller has earned a 5 of 5 Stars rating from Biblio customers.
Biblio.co.nz member since: 2005
Burke, Virginia
Ask Seller a Question

rubbing
Abrasion or wear to the surface. Usually used in reference to a book's boards or dust-jacket.
Cloth
"Cloth-bound" generally refers to a hardcover book with cloth covering the outside of the book covers. The cloth is stretched...[more]
tight
Used to mean that the binding of a book has not been overly loosened by frequent use.

Born in the midst of the Great Depression, the theme of the 1939 World's Fair was "The World of Tomorrow" - a theme that captured the hearts of a generation. Check out the maps, souvenirs, and other ephemera on Biblio!

Home Textbooks > The Old Army: A Portrait of the American Army in Peacetime, 1784-1898
Close