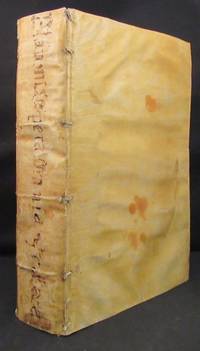 New
A new book is a book previously not circulated to a buyer. Although a new book is typically free of any faults or defects, "new"... [More]
spine
The outer portion of a book which covers the actual binding. The spine usually faces outward when a book is placed on a shelf.... [More]
First Edition
In book collecting, the first edition is the earliest published form of a book. A book may have more than one first edition in... [More]
folio
A folio usually indicates a large book size of 15" in height or larger when used in the context of a book description. Further,... [More]
verso
The page bound on the left side of a book, opposite to the recto page.
vellum
Vellum is a sheet of specialty prepared skin of lamb, calf, or goat kid used for binding a book or for printing and writing. ... [More]
edges
The collective of the top, fore and bottom edges of the text block of the book, being that part of the edges of the pages of a... [More]
device
Especially for older books, a printer's device refers to an identifying mark, also sometimes called a printer's mark, on the... [More]
leaves
Very generally, "leaves" refers to the pages of a book, as in the common phrase, "loose-leaf pages." A leaf is a single sheet... [More]

This gallery is dedicated to some of the best fiction and nonfiction portraying one of the greatest cities in the world. We Heart NYC! Enjoy browsing these books on New York City.