home Sumner & Stillman THE POSTHUMOUS PAPERS OF THE PICKWICK CLUB 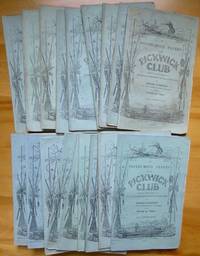 THE POSTHUMOUS PAPERS OF THE PICKWICK CLUB

THE POSTHUMOUS PAPERS OF THE PICKWICK CLUB

1836. Containing a Faithful Record of the Perambulations, Perils, Travels, Adventures and Sporting Transactions of the Corresponding Members. Edited by "Boz." With Illustrations. [20-in-19 monthly serial parts.] London: Chapman & Hall, 1836-1837. Original light green pictorial wrappers. First Edition, in the original 20-in-19 monthly serial parts, issued from April 1836 through November 1837. This was Dickens's first novel, and his first book to appear in monthly serial parts; the sketches that would become SKETCHES BY BOZ appeared first in periodicals, then in two-plus-one volumes in 1836-1837, and finally (once Chapman & Hall took over) in serial parts in 1837-1839. PICKWICK in parts is extremely complex bibliographically, mainly for two reasons both of which came to a head with the fourth part. Dickens at the time was essentially unknown (even as "Boz"), because all he had written were the above sketches, not yet in book or serial form; in fact C&H decided to publish PICKWICK only because the great illustrator Robert Seymour was involved -- and merely engaged the unknown Dickens to write something to accompany the illustrations. Seymour provided four plates for the first part, and had prepared three (of four planned) for the second part, when he died suddenly (by his own hand). C&H quickly engaged Robert Buss to take on the illustrating, which he did with two plates for the third part; with the great Seymour no longer involved, the publisher agreed to scale back the number of plates per part from four to two -- which also meant more writing, and money, for Dickens. But both Buss and C&H quickly acknowledged that Buss was not the right illustrator for PICKWICK, and beginning with the fourth serial part, the little-known Hablot K. Browne ("Phiz") was engaged for the remainder of the book -- and for many Dickens novels thereafter. Meanwhile, PICKWICK was not selling well. Only 1000 copies of the first part were produced, and only about half of those sold, so only 500 of the second part were produced. As C&H struggled to find an illustrator, the third and fourth parts were not big sellers either (perhaps dropping to only 300 copies or so). But in the fourth part, the first to include "Phiz's" plates, Dickens introduced the character of Sam Weller -- and the public loved him. The book's popularity soared with each subsequent part; people who had missed the early parts now wanted copies of them, and people as late as 1838 wanted sets of the parts too. As a result, the publisher was constantly having to print new copies of the parts (especially of the first four), for some of which "Phiz" designed new plates to replace the much-maligned two by Buss. Thus there are many issues of most of the parts, and a "Prime Pickwick" (a set with the first four parts in first state) are legendarily scarce. All of that said, this set is generally later-issue. Only Parts 9, 10, 14, 15, 16, 17, 18 and 19/20 are in first-state wrappers, and only Parts 9 plus 12-through-19/20 have the preliminary "Pickwick Advertiser" ads (later issues were generally published without time-sensitive ads). Part 3 has the replacement plates by "Phiz"; in general, most of the plates in the second half are first-state, while most in the first half are (as usual) second-state. Of the "Address" slips called for after the plates in seven parts, this set has all but the first two -- as usual. Contact us for further details. As for general condition, it is remarkably near-fine. There is very little edge-wear, and only four parts (11 plus the last three) appear to have deftly-repaired spines. The plates in Part 9 are slightly browned around the edges and have very minor foxing, but otherwise the plates are unusually clean and sharp. A set of first-issue parts in this condition would easily bring $25,000, and a "prime" set (few are known to exist) would be numerous multiples of that. In all, the fact that just over half of the parts are later-issue reduces the price significantly for the collector who wants a good-looking PICKWICK in parts that costs less than a new car. Hatton & Cleaver pp 1-88. Housed in a cloth clamshell case.

Seller rating:
This seller has earned a 5 of 5 Stars rating from Biblio customers.
Biblio.co.nz member since 2009
Yarmouth, Maine
Ask Seller a Question

edges
The collective of the top, fore and bottom edges of the text block of the book, being that part of the edges of the pages of a... [more]
First Edition
In book collecting, the first edition is the earliest published form of a book. A book may have more than one first edition in... [more]
remainder
Book(s) which are sold at a very deep discount to alleviate publisher overstock. Often, though not always, they have a remainder... [more]
Cloth
"Cloth-bound" generally refers to a hardcover book with cloth covering the outside of the book covers. The cloth is stretched... [more]
New
A new book is a book previously not circulated to a buyer. Although a new book is typically free of any faults or defects,... [more]
wrappers
The paper covering on the outside of a paperback.  Also see the entry for pictorial wraps, color illustrated coverings for... [more]

This gallery is dedicated to some of the best fiction and nonfiction portraying one of the greatest cities in the world. We Heart NYC!  Enjoy browsing these books on New York City.