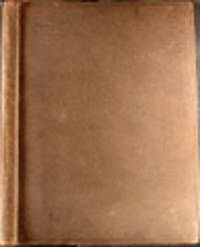 The Rhododendrons of Sikkim-Himalaya; being an account, botanical and geographical of the Rhododendrons recently discovered in the mountains of eastern Himalaya, from drawings and descriptions made on the spot, during a government botanical mission to that country, by Joseph Dalton Hooker... Edited by Sir W.J. Hooker

The Rhododendrons of Sikkim-Himalaya; being an account, botanical and geographical of the Rhododendrons recently discovered in the mountains of eastern Himalaya, from drawings and descriptions made on the spot, during a government botanical mission to that country, by Joseph Dalton Hooker... Edited by Sir W.J. Hooker

London: Reeve, Benham, & Reeve, 1851. Folio. (19 5/8 x 14 1/2 inches). Title with tinted lithographic vignette, 2 letterpress part titles, 1p. list of subscribers, 1p. preface to part II. Hand-coloured lithographic frontispiece and 29 fine plates, drawn on stone by John Nugent Fitch from drawings by J.D. Hooker, printed by Reeve, Benham & Reeve (12), Frederic Reeve (4) and Reeve & Nichols (14). Original oatmeal morocco-grained cloth, covers blocked with double fillet border, the flat spine lettered in gilt 'Rhododendrons of Sikkim-Himalaya', g.e., contained within a modern brown cloth box, titled in gilt on a black morocco lettering-piece A very fine copy of the rare second edition of this beautifully illustrated work on the Rhododendron family - "An important work for both the botanist and horticulturalist since it contains descriptions and plates of many of the best Rhododendron species...and an account of their discovery" (Great Flower Books). The Rhododendrons of the Himalayas amply demonstrate the adaptable nature of the plant kingdom: the species described vary from ground hugging 'alpines', to small shrubs, climbers, large shrubs and trees. For example: of the thirty-two species illustrated and described by Hooker in this important monograph, eight are described as trees by Hooker and vary in height from the 'Rhododendron lanatum' (a small tree), to the magnificent 'R. Campbelliae' and 'R. barbatum' at around 40 feet. The beautiful plates are amongst the best examples of the work of Walter Hood Fitch (1817-1892), one of the greatest botanical artists of the nineteenth century. Fitch had attracted the attention of Sir William Hooker (1785-1865) when he was working as an apprentice to a Glasgow firm of calico designers. `When Hooker was appointed Director of Kew Gardens, he carried his protégé south with him. That was in 1841: for the next fifty years Fitch remained at Kew, and his career is inseparably associated with those of Sir William and his son Joseph.' (Great Flower Books 1990, p.46). 'Fitch had the greatest competence of any botanical painter who has yet appeared in drawing the rhododendron' (Great Flower Books). 'In his lithographs he has captured the exuberant form and colour of these flowering shrubs.. Sometimes at the base of the plate, magnified views of the pistils, stamens and sections of the ovaries are presented. The first plate is unusually attractive because the plant... is shown in its native habitat, growing among the trunks of fallen trees against a hazy background of blue mountains.' (Oak Spring Flora). Fitch remained the chief (and usually sole) artist for the Botanical Magazine for forty-three years, producing over 9000 drawings including some of the most memorable images of his age. The plates are all based on J.D. Hooker's original drawings. Hooker spent several years exploring Sikkim, as well as parts of Nepal and Tibet. His field notes were sent to England from India to his father, Sir William Hooker, who edited the text for this work and contributed a preface giving an interesting overview of the discovery of the genus by western science. In addition to the many botanical discoveries that J.D. Hooker made during his exploration of the region, his 'observations on the geology and meteorology of Sikkim are still fundamental, and he explained the terracing of the mountain valleys by the formation of glacial lakes.' (DNB). A great many of the species of Rhododendron discovered and described here by Hooker were subsequently successfully introduced to western cultivation Cf. Blunt & Stearn The Art of Botanical Illustration p.264; cf. Bradley Bibliography II, p.676; Desmond The European Discovery of the Indian Flora p.144; cf. Great Flower Books (1990) p.101; cf. Nissen BBI 911; cf. Oak Spring Flora 104; cf. Stafleu & Cowan TL2 2969.

(US)
Bookseller Inventory #
21537
Title
The Rhododendrons of Sikkim-Himalaya; being an account, botanical and geographical of the Rhododendrons recently discovered in the mountains of eastern Himalaya, from drawings and descriptions made on the spot, during a government botanical mission to that country, by Joseph Dalton Hooker... Edited by Sir W.J. Hooker
Author
HOOKER, Sir Joseph Dalton (1817-1911)
Format/binding
Folio
Book condition
Used
Quantity available
1
Publisher
Reeve, Benham, & Reeve
Place of Publication
London
Date published
1851
Bookseller catalogs
Botany;

All items are guaranteed as described. Any purchase may be returned for a full refund within 10 working days as long as it is returned in the same condition and is packed and shipped correctly.

Donald Heald Rare Books, Prints, and Maps offers the finest examples of antiquarian books and prints in the areas of botany, ornithology, natural history, Americana and Canadiana, Native American, voyage and travel, maps and atlases, photography, and more. We are open by appointment only.

fine
A book in fine condition exhibits no flaws. A fine condition book closely approaches As New condition, but may lack the...[more]
plate
Full page illustration or photograph. Plates are printed separately from the text of the book, and bound in at production. I.e.,...[more]
morocco
Morocco is a style of leather book binding that is usually made with goatskin, as it is durable and easy to dye. (see also...[more]
gilt
The decorative application of gold or gold coloring to a portion of a book on the spine, edges of the text block, or an inlay in...[more]
folio
A folio usually indicates a large book size of 15" in height or larger when used in the context of a book description....[more]
vignette
A decorative design or illustration placed at the beginning or end of a ...[more]
spine
The outer portion of a book which covers the actual binding. The spine usually faces outward when a book is placed on a shelf....[more]
G
Good describes the average used and worn book that has all pages or leaves present. Any defects must be noted. (as defined...[more]
Cloth
"Cloth-bound" generally refers to a hardcover book with cloth covering the outside of the book covers. The cloth is stretched...[more]

Where can I get my book appraised?

Do you need to get an appraisal for a valuable book? This short guide from our Book Collecting Guide might help.