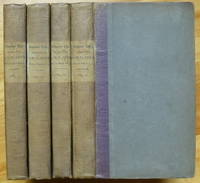 1808. [in the 1808 original boards] In Four Volumes. London: Printed by D.N. Shury... for Longman, Hurst, Rees, and Orme, 1808. Original grey-brown paper-covered boards with purple cloth spines and printed spine labels. First Edition of this collection of Gothic tales of the macabre, which Matthew Gregory Lewis adapted from original German, French and Spanish stories. As he indicates in his Preface, "Even in those Tales which are least my own, I have made so many and such important alterations, omissions, and interpolations, that it would have been less trouble to write an entire new work". Lewis (1775-1818) is often referred to as "Monk" Lewis because of his famous (infamous?) 1796 Gothic horror tale THE MONK -- replete with ghosts, murders and ravished maidens; some critics, notably Samuel Taylor Coleridge, considered the book blasphemous and Lewis never entirely escaped the resulting licentious reputation. In 1812 his father died, making him a wealthy man; no longer in need of cash, he promptly ceased writing and spent his remaining six years traveling -- especially to visit his slave-holding estates in Jamaica. In 1816 he visited with Lord Byron and Percy Bysshe Shelley in Geneva (translating Goethe's FAUST aloud to Byron), then headed back to Jamaica; on the return voyage to England in 1818, he succumbed to yellow fever and was buried at sea. He is considered to have significantly influenced the writing of other Gothic romance writers, such as Byron, Horace Walpole, and Mary Shelley. This set, without the Vol IV ads that appear only in some copies, is remarkably still in the original boards-and-labels after more than 210 years. Condition is amazing -- FINE except for a couple of cracked endpapers, with scarcely any other soil or wear (purple cloth faded as always). This title is extremely scarce in the original boards -- as it almost always turns up rebound in calf: one could not hope to find a better copy. Housed in a handsome morocco-backed slipcase with four felt-lined inner chemises. Provenance: the front free endpaper of each volume bears the penciled signature of Roger Senhouse (1899-1970), the English publisher (head of Secker & Warburg in the 1930s and 1940s) -- also a peripheral member of the Bloomsbury Group.

Seller rating:
This seller has earned a 5 of 5 Stars rating from Biblio customers.
Biblio.co.nz member since: 2009
Yarmouth, Maine
Ask Seller a Question

rebound
A book in which the pages have been bound into a covering replacing the original covering issued by the publisher.
spine
The outer portion of a book which covers the actual binding. The spine usually faces outward when a book is placed on a shelf....[more]
First Edition
In book collecting, the first edition is the earliest published form of a book. A book may have more than one first edition in...[more]
New
A new book is a book previously not circulated to a buyer. Although a new book is typically free of any faults or defects,...[more]
Cloth
"Cloth-bound" generally refers to a hardcover book with cloth covering the outside of the book covers. The cloth is stretched...[more]
fine
A book in fine condition exhibits no flaws. A fine condition book closely approaches As New condition, but may lack the...[more]
cracked
In reference to a hinge or a book's binding, means that the glue which holds the opposing leaves has allowed them to separate,...[more]

Take care of your old books – vintage, antiquarian, and fine – with these tips from a professional bookseller

The American Eclipse of 2017

The path of the total eclipse of August 2017 had our offices at 99% totality - we closed the office to go watch the spectacle, but first we put together this gallery inspired by eclipses to celebrate.