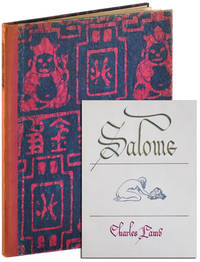 N.p.: Fridolf Johnson, 1948. A unique manuscript of Mary Lamb's romantic poem "Salome," composed around 1808-09, and first published in her husband Charles Lamb's Works [1818]; while the poem was originally published in her husband's works, and while his name is credited on the title page of this volume, the poem, according to scholar Adriana Craciun, "is indisputably hers" ("The Subject of Violence: Mary Lamb, Femme Fatale." Romanticism and Women Poets: Opening the Doors of Reception, p.65). Fridolf Johnson (1905-1988) was an American author, calligrapher, and illustrator, whose early work as a designer led him increasingly toward an interest in printing and typography. He eventually established the Mermaid Press, and became and active member of the Zamorano Club, Typophiles, and New York Chappel of Private Presses. His archive is held at the University of Delaware. (cf.Biographical Note. Fridolf Johnson Papers, 1950-1985). Quarto (26.25cm); original calligraphic manuscript (rectos), composed in black, burgundy, gold, gray, and dark green ink on translucent stock, bound into batik paper-covered boards with fuchsia cloth backstrip, and manuscript title label mounted to spine; [9] leaves, [3] blank; with illustrated title leaf, and colophon reading "Written and bound by Fridolf Johnson / April, 1948." Large decorative bookplate on metallic paper mounted to front pastedown (Salome Collection / Ex Libris Fridolf Johnson). Light wear to extremities, spine gently sunned, with a touch of fraying to spine ends; scattered foxing to front pastedown, with some offsetting along hinges from binders glue, otherwise text is clean; Very Good+.

Seller rating:
This seller has earned a 5 of 5 Stars rating from Biblio customers.
Biblio.co.nz member since 2010
Stephenson, Virginia
Ask Seller a Question

bookplate
Highly sought after by some collectors, a book plate is an inscribed or decorative device that identifies the owner, or former... [More]
leaves
Very generally, "leaves" refers to the pages of a book, as in the common phrase, "loose-leaf pages." A leaf is a single sheet... [More]
quarto
The term quarto is used to describe a page or book size. A printed sheet is made with four pages of text on each side, and the... [More]
sunned
Damage done to a book cover or dust jacket caused by exposure to direct sunlight. Very strong fluorescent light can cause slight... [More]
Cloth
"Cloth-bound" generally refers to a hardcover book with cloth covering the outside of the book covers. The cloth is stretched... [More]
spine
The outer portion of a book which covers the actual binding. The spine usually faces outward when a book is placed on a shelf.... [More]
New
A new book is a book previously not circulated to a buyer. Although a new book is typically free of any faults or defects, "new"... [More]
good+
A term used to denote a condition a slight grade better than Good.
colophon
The colophon contains information about a book's publisher, the typesetting, printer, and possibly even includes a printer's... [More]
title page
A page at the front of a book which may contain the title of the book, any subtitles, the authors, contributors, editors, the... [More]

Aleister Crowley was a well-known and highly controversial figure in the first half of the 20th Century. A writer, occultist, magician, and mountaineer, Crowley impacted a diverse collection of sub-cultures and interests. See collectible Crowley from Biblio booksellers.

Many of us love giving and receiving holiday cards - but did you know many of them are highly collectible? Whether signed by famous authors or just beautiful to look at, these collectible Christmas cards are sure to put a twinkle in your eye.