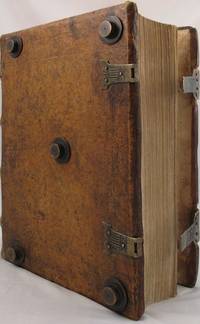 Nuremberg: Anton Koberger, 8 November, 1491. First Edition of this very rare and important work. With 96 full-page woodcuts, 2 of which are hand-coloured [and five repeated] by Michael Wolgemut and Wilhelm Pleydenwurff, three very large opening initials painted in colours and highlighted with gold, other large initials and rubricating throughout in red and blue. Printed double column, gothic type in two sizes, 40 and 43 lines, woodcut Hebrew letters on d4r. Folio, in a superb and very impressive and important contemporary German (probably Nuremberg) pigskin binding, heavily decorated in blind, both covers with large brass pieces at each corner and in the center of the centers, and additionally, with engraved brass clasps on embossed leather straps. 352 leaves, without 2 blanks only. A very handsome and proper copy in absolutely contemporary state and binding, the text very bright and fresh, a few ff only with some minor staining or evidence of expert minor repair, the binding most impressive, some expected age mellowing only, one hinge with minor cosmetic cracking but all firm and tight, front edges with minor and expert restoration. VERY RARE AND BEAUTIFULLY PRESERVED COPY OF The Schatzbehalter, or “treasure chest of the true riches of the saints and eternal salvation". THE SCHATZBEHALTER was an HIGHLY important illustrated work published BY ANTON KOBERGER the printer of the famed Nuremberg Chronicle. THE SCHATZBEHALTER PRECEEDED THE NUREMBERG CHRONICLE BY TWO YEARS. IT IS RARELY SEEN IN THE OPEN MARKET.
It was written by Stephan Fridolin, a Franciscan in Nuremberg whose German text narrates 100 events in the life of Christ. The woodcuts were designed by Michael Wolgemut, who became Dürer’s teacher in 1486, and by his stepson Wilhelm Pleydenwurff (c. 1460–1494), the son of the prominent Nuremberg painter Hans Pleydenwurff. The illustrations were meant to reinforce the biblical lessons in the minds of the audience, especially those who were illiterate. 'They are considered to have made a significant impact on Dürer and influenced his own monumental work in woodcut. He had been apprenticed to the Wolgemut-Peydenwurff workshop from 1486-89, and returned to Nuremberg from Basel soon after publication of the SCHATZBEHALTER.
Fridolin was aslso spiritual guide and confessor to the Poor Clares at Nuremberg. The text of the SCHATZBEHALTER is based on Scripture an tells the sotry of the life and passion of Christ. The accompanying illustrations were intended to impress the story more firmly on the mind of the audience, specifically those unable to read, as Fridolin states in his preface. It thus joins other late medieval works popularizing Scripture in text and image, such as the blockbook Biblia Pauperum. In his discussion of each woodcut, Fridolin explicates the literal and metaphysical meaning of the image, thus giving the modern reader an invaluable insight into medieval interpretation of imagery.' (See Description 2010, July, Christie's.)

First Edition
In book collecting, the first edition is the earliest published form of a book. A book may have more than one first edition in... [More]
tight
Used to mean that the binding of a book has not been overly loosened by frequent use.
folio
A folio usually indicates a large book size of 15" in height or larger when used in the context of a book description. Further,... [More]
edges
The collective of the top, fore and bottom edges of the text block of the book, being that part of the edges of the pages of a... [More]
Poor
A book with significant wear and faults. A poor condition book is still a reading copy with the full text still readable. Any... [More]
hinge
The portion of the book closest to the spine that allows the book to be opened and closed.
leaves
Very generally, "leaves" refers to the pages of a book, as in the common phrase, "loose-leaf pages." A leaf is a single sheet... [More]