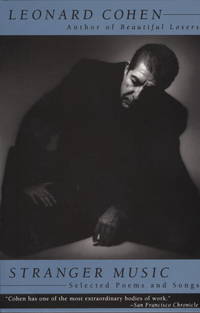 Vintage Books, 1994. Trade paperback, glossy wrappers, blue borders at top and bottom edges, a photo portrait of singer-poet on most of front wrapper, black at center back wrapper and spine, 415 lightly browned pages plus an ad. Mint.. First Edition. Trade Paperback. As New.

Some of the best work of one of the most enduring poet/songwriters of our time collectedWhen his fist album was released in 1967, Leonard Cohen was already well known in his native Canada as a poet and novelist, and in the United States as the writer behind Judy Collins' hugely popular recording of 'Suzanne. ' With the sucess of the first and through the release of ten more albums, Cohen Gained a reputation as a dazzlingly literate and consistently daring songwriter. Over the years his status as a cult artist has grown, and in 1988 the release of his album I'm Your Man' put Cohen back into the mainstream spotlight. His latest recording, 'The Future' has brought him renewed, widespread acclaim and this collection will include lyrics from that album, together with many of his famous classics, such as Suzanne, Joan of Arcand The Chelsea Hotel. STRANGER MUSIC brings together Cohen's song lyrics and a generous selection of his poetry (originally published between 1956-1992). It is a long overdue celebration of Leonard Cohen's extraordinary gift for language that speaks with rare clarity, passion and timelessness.

Books may be returned with 5 days for full refund--in same condition as sent.

An internet bookstore, we have added 20 books a day to our inventory for a total of more than 40,000, specializing in Poetry, Vietnam Conflict, Native American, Literary Criticism.

wrappers
The paper covering on the outside of a paperback.  Also see the entry for pictorial wraps, color illustrated coverings for...[more]
spine
The outer portion of a book which covers the actual binding. The spine usually faces outward when a book is placed on a shelf....[more]
edges
The collective of the top, fore and bottom edges of the text block of the book, being that part of the edges of the pages of a...[more]
First Edition
In book collecting, the first edition is the earliest published form of a book. A book may have more than one first edition in...[more]
trade paperback
Used to indicate any paperback book that is larger than a mass-market paperback and is often more similar in size to a hardcover...[more]
New
A new book is a book previously not circulated to a buyer. Although a new book is typically free of any faults or defects,...[more]

A lonely toy bear on an empty shop shelf on Christmas Eve in 1956 first captured the attention of Michael Bond, who kindly shared Paddington with the world.