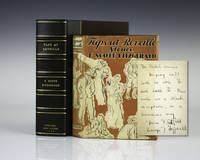 New York: Charles Scribners Sons, 1935. First edition, first state, with pages 349-52 uncancelled and with "catch it" reading on page 351. Octavo, original cloth. Association copy, inscribed by the author on the front free endpaper, "For Isabel Owens Hoping we'll both be able to look back to this winter as a bleak exception, in a business way from F. Scott ("Old Scrooge") Fitzgerald." The recipient, Isabel Owens worked full-time as Fitzgerald's Baltimore secretary from 1932-36. She continued part-time in this role until his death in 1940. In addition to her secretarial duties, Owens acted as a foster mother to the Fitzgeralds' daughter Scottie and companion to Zelda. In near fine condition with the spine gilt bright in a very good dust jacket with some inner strengthening to the folds. Housed in a custom half morocco clamshell box. A wonderful association copy. Taps at Reveille was published in 1935 and is a collection of 18 short stories, the final collection of short stories Fitzgerald published. He chose for inclusion in this volume what he considered his best short stories from the previous decade. The Freshest Boy, Crazy Sunday, and Babylon Revisited are the more popular short stories. Edith Walton reviewed the collection in The New York Times (1935): "Basil Duke Lee [in The Freshest Boy] is a bright, sensitive, likeable boy, constantly betrayed by a fatal tendency to brag and boss. He knows his failing, especially after the minor hell of his first year at boarding school, but again and again he is impelled to ruin an initial good impressionMr. Fitzgerald is always miraculously adept at describing adolescent love affairs and adolescent swagger." Walton considered Babylon Revisited, however, "probably the most mature and substantial story in the book. A ruefulfarewell to the Jazz Age, its setting is Paris and its tone one of anguish for past follies." In 1954, the short story was cinematized by MGM and starred Elizabeth Taylor and Roger Moore's as his Hollywood debut. The Oscar winning title song, by Jerome Kern, featured first in Lady Be Good (1941) but it was popularized by its play in this beloved drama. Film critic Bosley Crowther praised it when she said, "Where Fitzgerald did it in a few words-in a few subtle phrases that evoked a reckless era of golden dissipation toward the end of the Twenties' boom-Richard Brookshas done it in a nigh two-hour assembly of bistro balderdash and lush, romantic scenes" (Crowther, 1954). Consequently, Taps at Reveille both sheds light on the literary and cinematic climate of the decade and provides insight into some of Fitzgerald's final publications. Fitzgerald dedicated Taps at Reveille to his literary agent Harold Ober, who worked also for writers of Walton's status - J.D. Salinger and William Faulkner.

30 day return guarantee, with full refund including shipping costs for up to 30 days after delivery if an item arrives misdescribed.

Seller rating:
This seller has earned a 5 of 5 Stars rating from Biblio customers.
Biblio.co.nz member since: 2012
Palm Beach, Florida
Ask Seller a Question

Founded by Matthew Raptis, Raptis Rare Books is an antiquarian book firm that specializes in literature, children's books, economics, photo books, signed and inscribed books, and landmark books in all fields. Our business model is simple: we strive to handle books that are in exceptional condition and to provide exceptional customer service. We are proud members of the Antiquarian Booksellers Association of America (ABAA) and the International League of Antiquarian Booksellers (ILAB) and exhibit at major book fairs in New York, Los Angeles, San Francisco and Boston, as well as other regional fairs.

first state
used in book collecting to refer to a book from the earliest run of a first edition, generally distinguished by a change in some...[more]
Association copy
An association copy is a copy of a book which has been signed and inscribed by the author for a personal friend,...[more]
clamshell box
A protective box designed for storing and preserving a bound book or loose sheets. A clamshell box is hinged on one side, with...[more]
inscribed
When a book is described as being inscribed, it indicates that a short note written by the author or a previous owner has...[more]
jacket
Sometimes used as another term for dust jacket, a protective and often decorative wrapper, usually made of paper which wraps...[more]
First Edition
In book collecting, the first edition is the earliest published form of a book. A book may have more than one first edition in...[more]
fine
A book in fine condition exhibits no flaws. A fine condition book closely approaches As New condition, but may lack the...[more]
morocco
Morocco is a style of leather book binding that is usually made with goatskin, as it is durable and easy to dye. (see also...[more]
octavo
Another of the terms referring to page or book size, octavo refers to a standard printer's sheet folded four times, producing...[more]
Cloth
"Cloth-bound" generally refers to a hardcover book with cloth covering the outside of the book covers. The cloth is stretched...[more]
gilt
The decorative application of gold or gold coloring to a portion of a book on the spine, edges of the text block, or an inlay in...[more]
spine
The outer portion of a book which covers the actual binding. The spine usually faces outward when a book is placed on a shelf....[more]

Nothing quite whets the appetite for rare and collectible books like old and vintage cookbooks. Be sure to check out our cook books and food section of our rare book room.

The Beat Generation was born out of WWII, and it still continues to exert considerable influence on today's literary scene. Biblio sellers have a fantastic collection of Beat Generation books and ephemera for browsing.