Home > Quintessential Rare Books, LLC > And to Think That I Saw it on Mulberry Street 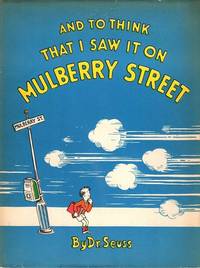 And to Think That I Saw it on Mulberry Street

And to Think That I Saw it on Mulberry Street

The Vanguard Press. New York, 1937 First Edition, First Printing with ALL the First Issue points. An attractive First Issue dustjacket that has the boy's shorts in white color instead of blue. This ORIGINAL sophisticated dustjacket has the publisher's $1.00 printed price present on the front flap with NO chips or tears. The book is bound in the publisher's original pictorial boards. The pages are clean with minor wear. There is NO writing, marks or bookplates in the book. A lovely copy with a custom acetate cover to protect the dustjacket.. 1st Edition. Hardcover. Fine/Fine.

The story follows a boy named Marco, who describes a parade of imaginary people and vehicles traveling along a road, Mulberry Street, in an elaborate fantasy story he dreams up to tell his father at the end of his walk. However, when he arrives home he decides instead to tell his father what he actually saw—a simple horse and wagon. And to Think That I Saw it on Mulberry Street, Seuss’ first published children’s book, and his career as a children's although, almost didn’t happen. After being rejected by 27 publishers Seuss decided to burn his manuscript in the incinerator of his apartment building, but as he walked home he ran into an old friend from Dartmouth, Mike McClintock, who had just started a job as an editor in the children’s section of Vanguard Press. The two signed a contract that day, Seuss later proclaiming “If I had been going down the other side of Madison Avenue, I’d be in the dry-cleaning business today.” Theodor Seuss Geisel—aka Dr. Seuss—is, quite simply, one of the most beloved children’s book authors of all time. The forty-four books he wrote and illustrated under the name Dr. Seuss (and others that he wrote but did not illustrate, including some under the pseudonyms Theo. LeSieg and Rosetta Stone) have been translated into thirty languages. Hundreds of millions of copies have found their way into homes and hearts around the world. Dr. Seuss’s long list of awards includes Caldecott Honors for McElligot’s Pool, If I Ran the Zoo, and Bartholomew and the Oobleck; the Pulitzer Prize; and eight honorary doctorates. Works based on his original stories have won three Oscars, three Emmys, three Grammys, and a Peabody. -

Read more: Identifying first editions of And to Think That I Saw it on Mulberry Street

Seriously, this book is awesome! Young Marco realizes that while imagination is a good thing, in the end honesty really counts.

All Books are American or British First Editions unless otherwise noted. Dustwrappers are present if stated. Returns may be made within 3 days of receipt if book is not described correctly. Reciprocal dealer courtesies extended.
A NOTE ABOUT CONDITION:
Our top condition is fine. Other dealers may use the words mint, untouched, very fine, etc. which mean the same thing. We try to refrain from using general terms like G, G+, G++, VG+, VG++, because we want to describe what the copy of the book really looks like. As a result, we almost never get any returns since the books are actually better looking than the way that they are described.
SHIPPING:
Books are shipped by the United States Postal Service via priority mail.
PAYMENT:
We accept out of state checks, paypal.com, money orders, cashiers check, and personal checks. No credit cards at this time, except through paypal.com. Dealers, institutions, and approved customers may receive deferred billing. California residents will be billed the appropriate sales tax.
WANTED:
We are always interested in purchasing individual or collections of fine books for resale. Trades and consignments will be considered. Please write or call to the above address.

Seller rating:
This seller has earned a 5 of 5 Stars rating from Biblio customers.
Biblio.co.nz member since: 2018
Laguna Hills, California
Ask Seller a Question

First Edition
In book collecting, the first edition is the earliest published form of a book. A book may have more than one first edition in...[more]
New
A new book is a book previously not circulated to a buyer. Although a new book is typically free of any faults or defects,...[more]

A lonely toy bear on an empty shop shelf on Christmas Eve in 1956 first captured the attention of Michael Bond, who kindly shared Paddington with the world.

Home > Quintessential Rare Books, LLC > And to Think That I Saw it on Mulberry Street
Close