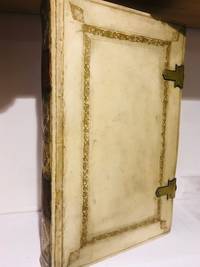 THE WORKS OF OUR ANCIENT, LEARNED, & EXCELLENT ENGLISH POET, JEFFREY CHAUCER: As they have lately been Compar’d with the best Manuscripts; and several things added, never before in Print. To which is adjoyn’d The Story of the Siege of Thebes, by John Lidgate, Monk of Bury. Together with The Life of Chaucer, shewing His Countrey

Third Speght edition and the last black letter edition of Chaucer's works. Folio, in fours (12.5 x 8 ins). [36], 660, (24), (blank leaf). Main text in black letters set in double columns. Illustrated by the engraved Gower portrait frontispiece of Chaucer, with genealogical tables and coats or arms, and by two armourial wood engravings in preliminary pages. In addition, two extra illustrations laid down on the front and second endpaper. Bound in early cream vellum with panel on front and back boards in gilt and blind, gilt corner-pieces, gilt spine expertly strengthened and retaining both original maroon labels, slightly rubbed. Marbled endpapers. New brass clasps, modelled on those contemporaneous with the binding; all edges gilt. Spine somewhat darkened, boards unusually clean with sharp corner points and a marked lack of rubbing. Frontis and prelims gently tanned, rest of text pages mellowed but devoid of foxing or other blemishes. With the large armourial bookplate of Frederick Edwin Smith the 1st Earl of Birkenhead (1872-1930), English politician, who served as British Lord Chancellor.

The last, black letter edition of Chaucer's works, substantially reprinted from the editions of 1598 and 1602, and the third to be edited by Thomas Speght, with the addition of the rediscovered endings to the Cook's and Squire's tales given in the advertisement on the final page. The dedication to Sir Robert Cecil, Principal Secretary to Queen Elizabeth, is signed Thos. Speght and the text of a letter to Speght from Francis Beaumont and verses by Francis Thyme, an additional editor of the 1602 edition (second Speght edition), are added. The Life of Chaucer is followed by an earlier dedication to Henry VIII. The Works include the Canterbury Tales, The Romaunt of the Rose, Troilus and Cresseide, The Legend of Good Women, The House of Fame, The Testament of Love, etc, and various miscellaneous works, some of which material is now known to be spuriously attributed to Chaucer. At the end is The Story of the Siege of Thebes, by John Lidgate (or Lydgate) with a glossary of 'old and obscure' and 'hard' words in Chaucer. Thomas Speght, a Yorkshire-born schoolmaster, produced his first edition of Chaucer's Works in 1598, with alterations and additions, with the prefatory letter by Francis Beaumont (d.1624), of Leicestershire, which justifies Chaucer's use of language 'somewhat too broad and plain' and his 'Incivility' and 'undecent Speeches.' For his second edition of 1602, Speght sought the assistance of Francis Thynne (c.1545-1608), whose father has published an edition of Chaucer in 1532, (hence presumably the inclusion of the dedication to Henry VIII). Other folio editions were published in 1542, 1561 (with Stowe's additions) and 1721 (with modernised spelling)

Seller rating:
This seller has earned a 5 of 5 Stars rating from Biblio customers.
Biblio.co.nz member since: 2020
London, Greater London
Ask Seller a Question

At Worlds End Bookshop we offer a large and varied selection of mostly locally-sourced books on most subjects with especially strong holdings in Art, Philosophy, Travel, Jazz & Blues, and Modern First Editions. But to define us by these categories would be limiting ... we stock what we find and what we fancy, simple as.

edges
The collective of the top, fore and bottom edges of the text block of the book, being that part of the edges of the pages of a...[more]
folio
A folio usually indicates a large book size of 15" in height or larger when used in the context of a book description....[more]
rubbing
Abrasion or wear to the surface. Usually used in reference to a book's boards or dust-jacket.
First Edition
In book collecting, the first edition is the earliest published form of a book. A book may have more than one first edition in...[more]
spine
The outer portion of a book which covers the actual binding. The spine usually faces outward when a book is placed on a shelf....[more]
bookplate
Highly sought after by some collectors, a book plate is an inscribed or decorative device that identifies the owner, or former...[more]
gilt
The decorative application of gold or gold coloring to a portion of a book on the spine, edges of the text block, or an inlay in...[more]
vellum
Vellum is a sheet of specialty prepared skin of lamb, calf, or goat kid used for binding a book or for printing and writing. ...[more]
New
A new book is a book previously not circulated to a buyer. Although a new book is typically free of any faults or defects,...[more]