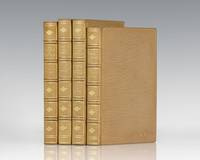 Description:
Finely bound by Sangorski and Sutcliffe of the works of J.D. Salinger. Octavo, bound in full morocco, gilt titles to the spine, gilt ruled to the spine, front and rear panels, raised bands, marbled endpapers. In fine condition. J.D. Salinger's first critically acclaimed story, A Perfect Day for a Bananafish (1948), appeared in New Yorker Magazine, which would publish much of his later work. Published in 1951, Salinger's best known and immensely successful novel, The Catcher in the Rye, was followed by Nine Stories (1953), Franny and Zooey (1961), and two novellas, Raise High the Roof Beam, Carpenters and Seymour: An Introduction (1963).
Item Price
US$2,800.00
FREE shipping to USA 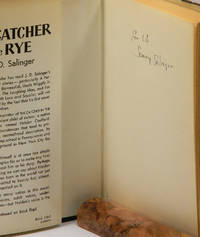 Description:
Boston: Little, Brown, 1951. Later book-club printing INSCRIBED BY SALINGER AS "SONNY," A CHILDHOOD NICKNAME USED ONLY WITH FAMILY AND OLD FRIENDS: "For Lili, / Sonny Salinger." We assume "Lili" was "Lili Lefforts," as we know of a Modern Library edition of NINE STORIES inscribed to "Lili Lefforts" cataloged by Ken Lopez Bookseller in 2009, at which time he stated, "It is likely that Lili was a childhood friend, probably of his parents; we have seen one other Salinger book from this period . . . inscribed as 'Sonny Salinger' and it was to the parents of a friend...." Salinger stopped using "Sonny," except with family and old friends, in his early teens. The fact that this book would have been inscribed in the 1950s or later (when he had already become a virtual recluse), lends credence to the supposition that "Lili" was a childhood friend. The value of this particular copy as a later book-club edition is… Read more
Item Price
US$67,200.00
US$5.00 shipping to USA