Since its opening in 1991 within the premises of a small model factory at Alnwick Station, Barter Books has grown well beyond original expectations. Starting off in what was the ticket and parcel office of the original Station, the bookshop has expanded down the platforms and through the waiting rooms, until it now covers over one-quarter of the whole Station site. This translates into an area exceeding 8000 square feet and containing over 350,000 books on more than three miles of shelving. Also the Famous Writers Mural - 40 feet long by 18 feet high, the similarly sized Railway Mural and the Tennyson Installation. The bookshop also sells secondhand videos and music (CDs, LPs, cassettes, sheet music), as well as a small but growing section of artists' prints. And then there are the shop's many extra features! These include an open fire in the winter, coffee and cookies, a model railway running above the book columns, a mini-cybercafe, generous seating and browsing areas, a children's room, and dozens of glass cases containing many of the more interesting antiquarian books. The latest feature is the Station Buffet with hot and cold food and a fine selection of coffees and teas. A final note: during the enlargement process the owners took (and are taking!) particular pleasure in restoring, as they can, various features of the Station. This so far includes the original North Eastern Railway cast iron fireplaces, two of the Station clocks, a drinking fountain, and various waiting rooms. Most dramatic of all, however, was the restoration of part of the glass roof. That was when we all stood about watching as the sun came streaming in for the first time in many years to bring the wonderful old Station visually back to life.

We run a 'no quibble' returns policy. If we have made any error of collation or missed any significant flaw, or if we have failed to describe the condition honestly and accurately, we refund the cost of the book in full, plus the cost of outward shipping, plus the cost of your return shipping. 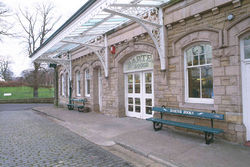 We also have a brick-and-mortar store! Visit us at:

Barter Books Ltd is a member of: