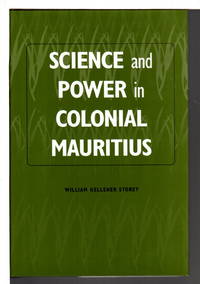 Rochester, NY:: University of Rochester Press,, (1997). Fine in a fine dust jacket (as new.). First printing. Under both the French and later the British, sugar dominated the island's agriculture since the early 1800s - and so it followed that science on the island would also be focused on sugar. This book examines, through using the history of sugarcane production in Mauritius, "the cross-cultural debates about the production and dissemination of science and technology from 'developed' to 'less-developed' countries and from elites to peasants within these countries. The book also shows in great detail that the history of science, technology, and colonialism can shed light on contemporary problems in natural resource management and global policy making." A volume in the series "Rochester Studies in African History and the Diaspora". Notes, bibliography, index. ix, 238 pp.
Item Price
$ 35.00 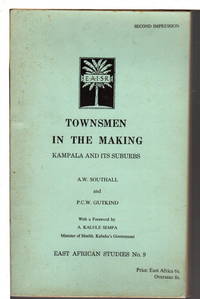 Kampala, Uganda:: East African Institute of Social Research,, 1957.. Good overall in stiff light green cardboard covers (some minor wear to covers, few spots foxing, maps are in very good condition) . 2nd printing. A description of the social conditions in the dense African settlements on the outskirts of Kampala, as the old order is changing, although not without resistance. Includes 3 folding maps in rear pocket. Foreword by A. Kalule Sempa. East African Studies, No. 9. Glossary, tables xiii, 248 pp. From the library of author and political scientist Constance A. Freydig, with her label on first page.
Item Price
$ 25.00 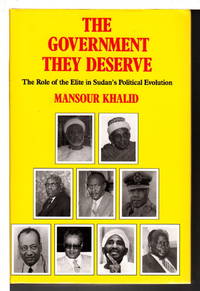 London:: Kegan Paul International,, (1990). Fine in fine dust jacket.. First printing. "A former minister in the Sudanese government attributes the country's current political crisis to the monopoly of power by a small group since independence three decades ago. He traces the evolution of politics, the first multi-party government, and the period of military rule, and analyzes the era of revolution and its effect on domestic and foreign policy." Although this books ends on a hopeful note - the way ahead - Sudan now, 30 years later, is more deeply mired in corruption, violence and revolution than ever. Notes at the end of each chapter. Several appendices, bibliography, index. viii, 480 pp. Map endpapers.
Item Price
$ 45.00 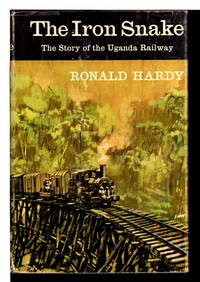 New York:: Putnam,, (1965). Near fine in very good dust jacket.. First US printing. The Story of the Uganda Railway. The line from Mombasa to Victoria Nyanza, 582 miles in length, is still the mainspring of Kenya's economic life. This books describes the men who planned it and built it, the dangers they encountered from wild beasts and savage tribes, and the politics of colonial expansion which were really behind it. Photographs, sources. 318 pp.
Item Price
$ 24.50 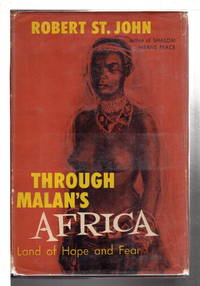 Garden City, NY:: Doubleday,, 1954.. Very good in a good only dust jacket(price-clipped, some chipping to ends of spine).. First printing. A "first hand report on the most explosive racial situation in the world" - one which traces the course of Afrikaner D. F. Malan's National Government in South Africa to its dictatorial powers. Includes interviews with liberal leaders, including Manilal Gandhi, Alan Paton, Luthuli, and young intellectuals. Index. 317 pp. Map endpapers.
Item Price
$ 23.50 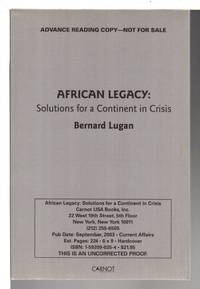 New York:: Carnot USA Books,, 2003. Very near fine in glossy printed gray wrappers.. Uncorrected proof (trade paperback format. ) A controversial work by this Moroccan born African scholar, one which focuses on "the failure of the West to take into account the continent's ethnic realities. . . . His book describes a seven-step process leading to a redesign of the borders inherited from the colonial era and a healthy recognition of the ethnic realities that are tearing Africa apart." SIGNED on the half title page and dated in Los Angeles in May 2003 - that is, before publication. Translated and adapted by Tom Clegg. Map, index, footnotes. 225 pp.
Item Price
$ 34.50 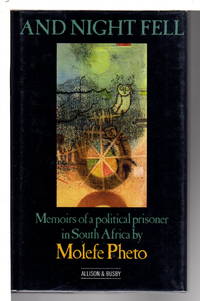 London:: Allison & Busby,, (1983). Very good in a fine dust jacket (a clean, tight copy, but with rather severe toning to the pages). First printing. Memoir by a Soweto music teacher, active in the promotion of Black culture and in opposition to apartheid, of the 281 days he was held, without trial, as a political prisoner in South Africa (271 of these days in solitary confinement). 218 pp.
Item Price
$ 24.50 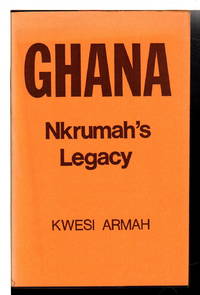 London:: Rex Collings,, 1974.. Very near fine in plain back card covers, in a near fine orange outer wrapper (some sunning to the spine of the dust jacket). First printing, a trade paperback, issued simultaneously with a small hardcover printing. A look - by a Ghanian - both at Ghana's struggle for political and economic independence and an assessment of the legacy of Kwame Nkrumah. Bibliography. ix, 182 pp plus index.
Item Price
$ 21.50 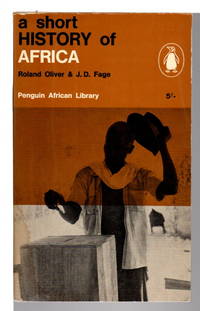 London:: Penguin,, (1962). Good only (rather severe toning to the pages, some scattered underlining). Paperback - 2nd printing A concise, one-volume history of Africa from earliest pre-history to the Pan African congresses. Maps, index. 280 pp. plus publisher's ads. A title in the Penguin African Library.
Item Price
$ 11.00 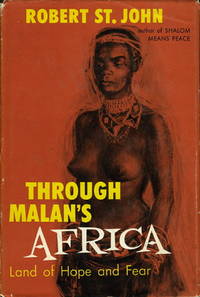 Garden City, NY:: Doubleday,, 1954.. Very good in very good dust jacket (some chipping to the ends of the spine of the dj.). Hardcover. A first hand look at the explosive racial situation in South Africa at the height of apartheid - and also a book that discusses the hope which can arise from the young liberal leaders - such as Manilal Gandhi, Alan Paton, Luthuli and others. Index. 317 pp. Map endpapers.
Item Price
$ 18.50

Baton Rouge, LA: Louisiana State University Press, , 1987.. Fine in fine dust jacket (a new copy.). First printing. Deals with the rise of African independent churches in Southern Africa in the late 19th century and with the role that African Americans played in that rise. One of the most significant alliances was with Bishop Henry McNeal Turner of the African Methodist Episcopal Church, and in addition, African students came to the US to study at black religious colleges and young African Americans were sent to Africa as missionaries. Several appendices, extensive bibliography, index. 231 pp.
Item Price
$ 25.00

Want to know when Bookfever.com, IOBA adds new books to this category?