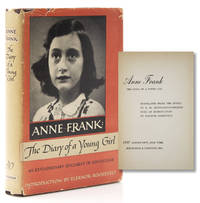 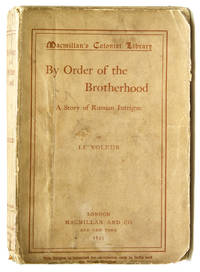 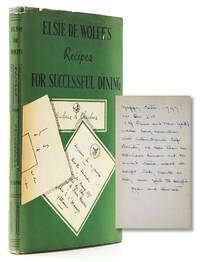 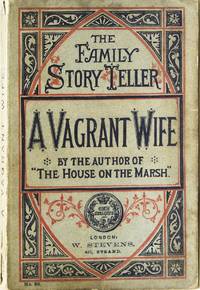 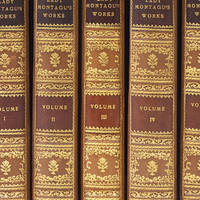 Seneca Falls, NY and Washington D.C., 1981. Each approximately 3 1/2 x 6 1/2 inches. Fine, matted and framed together to 13 x 20 inches. Each approximately 3 1/2 x 6 1/2 inches. American Conservative Women. A handsomely framed group of four first day covers signed by prominent 20th century American Conservative women. Includes a Supreme Court American Flag first day cover, December 17, 1981, signed by Sandra Day O'Connor (b. 1930), who became the first woman to serve on the court when she was appointed by President Reagan in 1981; an "Honoring the Women of America" cover, 1960, signed by Clare Boothe Luce (1903-1987), author of "The Women" and the first woman appointed to a major ambassadorial post; and two post-marked from Seneca Falls on July 19, 1948, with stamps and envelopes commemorating the centennial of the Women's Rights Convention there; one is signed by Virginia Knauer (1915-2011) as Specialist to President Nixon for Consumer Affairs, the other is signed by Dorothy Andrews Elston (1917-1971) as Treasurer of the United States.
Item Price
$ 500.00 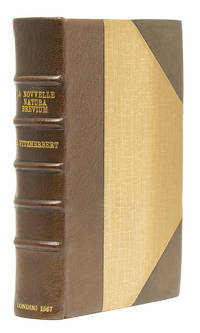 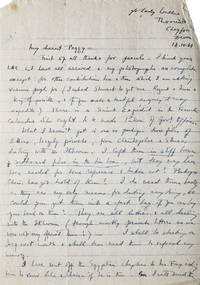 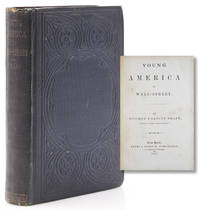 New York: Derby & Jackson, 1857. First edition. 406 pp. 8vo. Publisher's blue cloth, covers decoratively stamped in blind, spine titled in gilt. Soiling to fore-edge of front cover, spine ends worn, scattered foxing to text. First edition. 406 pp. 8vo. First edition of this history of American finance by George Francis Train. Train (1829-1904) was born in Boston, received an education in Massachusetts, and found work in a relative's shipping office in Boston. He went on to manage the company's offices in Liverpool and Melbourne, Australia, before embarking on a tour of Asia, the Middle East, and Europe. Train became a proponent of streetcar lines in England and railroads in the American West, involved himself in numerous public issues, including the Fenian cause, and wrote several books. Train was a major supporter of women's rights, and provided financial backing for Susan B. Anthony's newspaper, THE REVOLUTION. Train was a candidate for the American presidency in 1872, joined the French Communists (only to be expelled from France in 1870), and championed Victoria Woodhull. His greatest impact on the public imagination stemmed from his around-the-world trip of 1870, which he accomplished in eighty days, serving as the inspiration for the Jules Verne novel. Train traveled around the world at least two more times, and became increasingly eccentric in his old age.
Item Price
$ 600.00 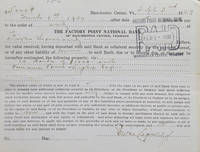 Various places, 1929. Various sizes. Fine condition overall. Various sizes. An archive of material related to the writing career of Edwin Lefévre (1871-1943), the famed documentarian of Wall Street in the first decades of the 20th century. Lefévre's first book, Wall Street Stories (1901), was a series of eight lightly fictionalized accounts of Wall Street operators which created a model Lefévre would follow for the rest of his career. Two of his later works on Wall Street, Reminiscences of a Stock Operator (1923) and The Making of a Stockbroker (1925), have become classics of the literature of finance. Most of the work published in his nine books initially appeared in magazines, and much of the material in the present archive is comprised of incoming correspondence from editors of the leading magazines of the day where Lefévre's pieces first appeared. Also present is Lefévre's retained copy of his publishing contract for Wall Street Stories; several handwritten letters from Lefévre to his wife while on a transatlantic voyage with the publisher of the Saturday Evening Post; a promissory note signed by Lefévre; publisher sales reports; a collection of 21 volumes from Lefévre's library, most inscribed by the authors; and other material Comprising: Agreement for the publication of "Wall Street Stories," 2 pp, between Lefévre and publisher McClure, Phillips & Company, July 5, 1901, standard printed contract completed in type, signed by John S. Phillips as Vice-President of the McClure, Phillips, & Co., publisher's embossed seal. The contract stipulates Lefévre's commission of the retail price of each cloth-bound book sold to be 10% of the first 5,000 copies sold; 12.5% of the next 5,000; 15% of the third 5,000; and 20% of all copies sold thereafter. A series of 6 Autograph Letters Signed ("Ed"), 9 pp, on board the Cunard R.M.S. "Aquitania" and London, July 1927, to his wife Martha Lefévre. Affectionate letters written while on excursion with Saturday Evening Post editor George Horace Lorimer, regarding shipboard activities, a man going overboard, antiquing, work on articles, shopping in London, his health, etc. WITH: TLS of Lorimer to Martha Lefévre, 2 pp, Philadelphia, June 17, 1927, on Saturday Evening Post letterhead, humorously imploring her to allow EL to accompany him on said transatlantic journey in order that EL might undertake a series of articles for the Post. (A more detailed inventory available upon request.) Promissory Note Signed ("Edwin Lefévre"), Factory Point National Bank, Manchester Center, Vermont, September 3, 1929, agreement to repay $5000. Autograph Letter Signed ("E.L."), 1 p, New York, January 21, 1930, on Century Club stationery, to "Bill," reading "Here's your $10,000 Payoff etc," verso with ANS of W.? making calculations and with post-script, "Have you had any of those Century Club Gin Cock-tails?" A group of 50 Typed and Autograph Letters Signed, approximately 80 pp, to Lefévre, nearly all from editors at various American magazines for which Lefévre wrote, including McClure's, Saturday Evening Post, Everybody's Magazine, the American Magazine, and Harper's; many prodding Lefévre for overdue stories and many others suggesting edits to submitted to articles. These include discussions of "The Millionaire Maker"; "What Availeth It?; "The Reason Why"; the plates for "The Golden Flood" and "Wall Street Stories"; "The Lizard"; "The Plunderers"; a German translation of "Sampson Rock"; a story on Senator Nelson Aldrich; and other works. Correspondents include George Horace Lorimer, John O'Hara Cosgrove, Gilman Hall, H.M. Alden, F.A. Duneka, Stella Virginia Roderick, John M. Sidall, John S. Phillips, Senator Albert J. Beveridge, and others. Also present are letters from Lefévre's brother Ernesto, about investment opportunities in Panama. (A more detailed inventory available on request.) Proof sheets of the biographical entry on Lefèvre for the "50-Year Book" of his alma mater, Lehigh (class of 1891), 5 pp Two Doubleday, Page & Co. sales reports, for "The Golden Flood" and "Wall Street Stories, for the period February 1 to August 1, 1909 A collection of 21 volumes from Lefévre's library, almost all inscribed by the author to Lefévre, some with his ownership signature, a few inscribed to Martha Lefévre. Authors include Brander Matthews, John Kendrick Bangs, Robert H. Davis, Gertrude Hall, Robert W. Chambers, Donald Ogden Stewart, Kenneth L. Roberts, and others. (Complete list available on request.) Miscellaneous material including 9 letters to Martha Lefévre, 2 letters to Edwin Lefévre, Jr, and utility bills.
Item Price
$ 7,500.00 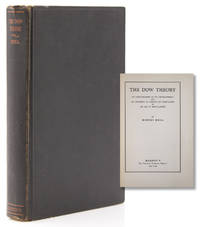 New York: Barron's, 1932. First edition. xi, [1], 252 pp. 8vo. Publisher's black cloth. Extremities rubbed, cloth split at head of sale. First edition. xi, [1], 252 pp. 8vo. "The third important member of the triumvirate which professed the validity of the Dow Theory was Robert Rhea. He followed Charles Dow and William P. Hamilton" (Zerden). "While confined to bed with illness for ten years, Rhea studied the Dow's action thoroughly, eventually becoming convinced that it provided the only accurate method for forecasting stock movement. Idolizing Dow and William P. Hamilton, Rhea formulated a complete history of Dow Theory and, in conjunction with students of the theory from across the U. S., defined its terminology. This clear and precise work is the result" (Dennistoun). Dow Theory Comment pamphlet by Robert Rhea laid in. Dennistoun 405; Zerden, p. 10
Item Price
$ 750.00 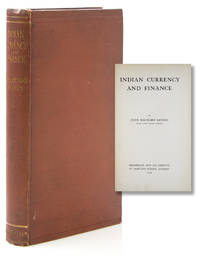 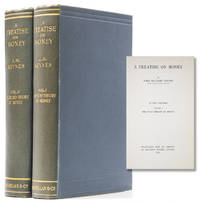 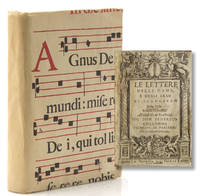 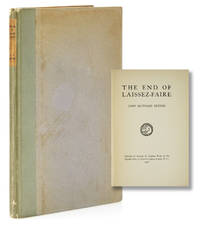 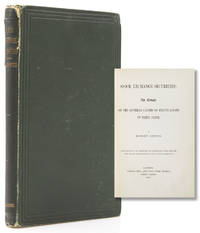 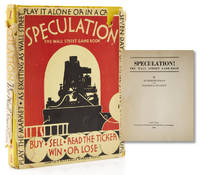 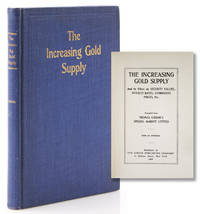 Want to know when James Cummins Bookseller adds new books to this category?