1 Peso Banknote Commemorating the Anniversary of Argentina's Economic Independence (1816 to 1947). This banknote has slight signs of handling, but does not app
Item Price
$ 4.50

Pick Catalogue # 21b. Issued by the French Colonial Government for the French Polynesian territory. Interesting enough, the banking matters seem to have been directed from the French Indo-China Bank Condition conservatively graded as Very Good. Presents wrinkles typical of a circulated banknote and a few minor bends or creases. There is a tiny coffee colored stain on the edge of the banknote that can be seen on both sides. Lastly, there are 4 tiny pinholes, which may be the result of stapling or pinning, a common practice in many developing countries (or developing colonies) around the world.
Item Price
$ 12.77

Chinese notes of this era typically have several overprints or rubber-stamp marks. This note has one such mark, "CF" in a circle. The note is in VERY GOOD CONDITION, showing signs of heavy regular use. There are quite a few wrinkles and folds, but no tears or damage of note.
Item Price
$ 46.78 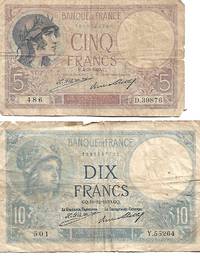 These notes have been circulated, for sure. Don't think of them as a worn out old banknotes. Think of the stories that these bills could tell from all that they has seen since 1929 or 30! As can be seen, the 5 Franc banknote is a bit tattered, but is mostly intact, with a few very minor tears starting here and there around the bill. There is a split running vertically in the center, let than an inch long, but does not run the length of the note. Thew 10 Frank note has fared a bit better, with a bit of rough edges, and a crayon marking on the reverse
Item Price
$ 5.90

Like the USA*, Chile has a third unit of currency that most Chileans are really unaware of, the "Condor". The "Condor is the equivalent of 10 Chilean Pesos. This banknote is in VERY GOOD Circulated Condition, with no outright damage, but there is a marking, the number "31" in what appears to be blue crayon on the reverse side of the bill. There is minor toning and wrinkling. In the USA, the "Eagle" is he equivalent of US$10. This denomination is generally only used is the minting of Gold Eagle Coins issued by the U.S. Mint.
Item Price
$ 5.90

Only the slightest wrinkling from handling by collectors over the years. Banknote has never actually been circulated.
Item Price
$ 5.50

This banknote shows regular use, with three well defined vertical creases and one horizontal crease along the center. There is the genesis of tearing or separation at the top and the bottom of the center vertical crease. w, as well as other minor wrinkles.
Item Price
$ 5.80

This banknote shows regular use, with three well defined vertical creases, as well as other minor wrinkles.
Item Price
$ 4.88

This banknote does show signs of use, but no outright damage. There are a few crease marks and the bill is generally crinkled and toned. The crispiness of thew paper is lost.
Item Price
$ 16.50

This banknote has been used, and does show light wear and no actual damage of note. There are a few creases and folds. Nice filler for Worldwide Collector. 19th Century Agriculturalist and Religious Reformer, Ninomiya Sontoku's, likeness is featured ion the obverse vignette Serial # 157722
Item Price
$ 5.90

No major damage or flaws. This banknote is slightly crinkled, from light use, but there are no serious folds or creases. This banknote shows signs of regular use, toning, soiling, wrinkles and light folds. There are signs of a crease or two right down the middle of the bill. However, the wear is moderate and there are no signs of any major abuse.
Item Price
$ 5.60

This Banknote is in FINE+ CONDITION. The paper is crisp, and does not appear to have been circulated, but does show definite signs of handling. There are a few bends and light folds, but still a very handsome banknote for its vintage. Signed by
Item Price
$ 29.88

No major damage or flaws. This banknote is slightly crinkled, from light use, but there are no serious folds or creases. There are no notable stains, marks, or tears, but there is a fair amount of soiling and toning.
Item Price
$ 5.88 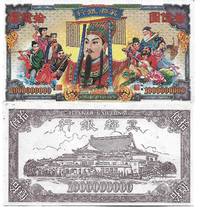 These "Hell Banknotes" are Chinese Buddhist "Joss" Paper, burned in effigy at funeral celebrations. IT IS NOT PLAY MONEY! There are scary stories about foolish foreigners who did not heed local warnings about playing with, stealing or eating funeral or ghost offerings in Asia. Are you sure you want to buy these? These banknotes are produced within and for the Chinese/Thai community in Thailand and Laos. Sold under the name, "Hell Bank of Universal" in packs of 20 Banknotes This lot is for a pack (Which may have been opened for scanning) of 20 identical 1,000,000,000 Hell Dollar Bills. Take advantage of our multiple item shipping discounts!
Item Price
$ 1.88

Want to know when Paper Time Machines adds new books to this category?