Our business was first established as Stone of Scone Antiques in 1976 in Connecticut. About 10 years later, my husband Tom, who had become intrigued with Samuel Colt and Colt Firearms, became a Federally Licensed Firearms dealer. We sold and appraised antique and collectible firearms, hand loading equipment, and ammunition. We also sold the typical antique items. Eventually we became disenchanted with antiques. Being a book lover most of my life, I decided to add books to our shop. We started with one bookcase and within six months we were putting an addition on the shop - just for the books. Then the books started to overflow into the house and we decided to list our books on-line. Therefore, Books by Jan was born. In October 2000, we closed our shop and relocated to the foothills of the Blue Ridge Mountains in North Carolina. We purchased a 50-acre mountain and built our semi-retirement log home on the top. We are 2,360' high with a view of the Blue Ridge Parkway, Mt. Jefferson in North Carolina, and Mt. Rogers in Virginia. t Living in the mountains is a pleasure every day.

Principal location is found at the Getty Street Marketplace in Downtown Uvalde, Texas. A second location is located in Comfort Antique Mall. A third location is found in Lotza Stuff Flea Market and Antiques in Ruidoso Downs, New Mexico. With over 4000 titles concentrating on the Texas and the Southwest, as well as hunting, fishing and the outdoors, if you're looking for a specific title, i might have it.

We are a small family-owned bookseller

Downtown, on the Saône quay, facing ancient Lyon since 1983. Our bookshop specializes in old books on hunting & fishing. We publish a catalog on these items and send it on demand.

Buy with confidence! We have been full time booksellers for over 25 years.

On The Road Books 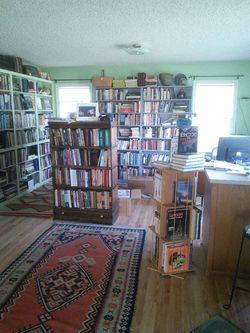 We specialize in western history, gun knife and hunting titles. Also try to stock Wyoming history titles. We have a walk-in store on US Hwy 26/85 the most direct route to Fort Laramie National History site..We have what I think is the largest seleciton of weapons titles in SE Wyoming, both new and used. Always looking for good used weapons titles. 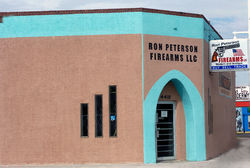 Ron Peterson Firearms/Antiques has been in business since 1968, selling modern and antique firearms, firearms accessories, and books.

A wide collection of gun, hunting and military books. Most in like new condition. Some older and show wear.

Used, rare and out-of-print books primarily in the field of Natural History but including sporting, hunting and regional accounts.

Search within Bookstores Specializing in Hunting