Boomerang Bookshop: Nomad Chapter is a mobile bookstore housed in a former bookmobile serving the community of Greensboro, North Carolina. Boomerang is primarily a used bookstore but also features a selection of new titles, zines, and textbooks. In addition, the shop also offers textbook buybacks and online sales.

Joy of Books opened in April of 2010 to serve the Hendersonville, Flat Rock and Asheville area. We carry a variety of used books as well as feature everything Western North Carolina. We are located at 242 North Main Street, Hendersonville, NC 28792. You can reach us at 828-551-7321

McAllister & Solomon is an open shop specializing in nice copies of better books in a variety of fields. Most of our stock of 25,000+ volumes are not currently cataloged. We welcome want lists. All books with dust jackets are covered with Mylar jacket protectors.

Pages Past Used and Rare Books

Pages Past is a small used & rare bookshop located a few blocks from the University of North Carolina at Greensboro. Since 1996 we have been serving the Triad community as well as customers from around the world. We have around 15-20,000 volumes in our shop. We specialize in North Carolina, Virginia, Civil War, Old Leather, Christianity, Eastern and Western Philosophies, and the simply unusual. We very likely have the oldest books in Greensboro; we keep a nice selection of antiquarian volumes and scholarly books. 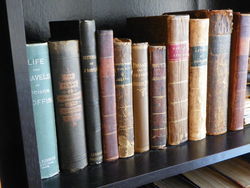 We stock a wide variety of used books, including many inexpensive titles that are not listed online. We also sell new books by local authors and books about Quakers and Piedmont North Carolina. In the categories below, Vintage books are at least 50 years old, and Antique books are at least 100 years old. Vintage Children's may be more recent, but at least 30 years old.

The Reprint Company Publishers dates its origins to the mid-1950s when my father, who was editor of the local Spartanburg Journal, an afternoon newspaper, became involved with the serialized publication of John B.O. Landrum's History of Spartanburg County in the paper. He then issued that as a hardback book in 1959. Over the next ten years, he published about thirty reprints. I became publisher in 1970 and began moving it from a hobby-business to a fulltime occupation.In the early 1970s, I was contacted by the North Carolina Library Association concerning a list of out-of-print North Carolina titles which they felt should be reprinted. Jointly we developed a project which allowed all of the books to be published. Over the next fifteen years, I worked with library associations throughout the South and published reprint editions of approximately three hundred books.From that time to the present, I have been involved in the publication of over six hundred titles with the areas of specialization remaining local and regional history, scholarly material, and genealogical source material for the Southeastern area.The vast majority of our books are hardback and are printed on a long-life paper with a neutral pH factor. We are using Print on Demand technology to bring the better of our backlist titles back into print. The books listed here include titles we have in inventory here and orders are shipped from that inventory. The titles listed as Print on Demand are available in that format and are printed upon receipt of an order and ship directly from the bindery within three to five business days.