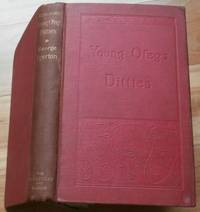 Description:
1895. [signed by "George Egerton"] By Ola Hansson. Translated from the Swedish by George Egerton. London: John Lane / Boston: Roberts Bros., 1895. 16 pp ads dated 1895. Original blind-stamped red cloth. First Edition in English, translated by "George Egerton" (pseudonym of Mary Chavelita Dunne Bright). This book is often collected as a "Keynotes Series" wannabe... It was planned as a volume in that series (as George Egerton's other volumes in that series mention this one as "uniform" with them), and Aubrey Beardsley designed the title page and binding; the book is in all ways similar to "Keynotes" volumes, except that the cover design is in blind rather than in another color, and there is no "key" monogram on the spine or inside. (Stetz & Lasner surmise that Lane withdrew this title from the Keynotes Series at the last moment, sensing that "George Egerton's" star was beginning to wane.) This copy is INSCRIBED BY… Read more
Item Price
NZ$359.03
NZ$47.03 shipping to NZL 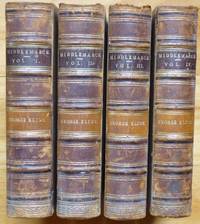 Description:
1871. [in four volumes] Edinburgh and London: William Blackwood and Sons, 1871 (for Vol I; 1872 for Vols II, III & IV). Bound in three-quarter calf with leather spine labels, with marbled paper boards that match the marbling of the endpapers and the (trimmed) page edges. First Edition in book form of George Eliot's famous "study of provincial life." Part of the novel follows Dorothea Brooke, idealistic and ardent, who seeks dedication to some worthy cause. She believes she has found it in her marriage to Edward Casaubon, an elderly pedant who is devoted to the immense task of writing a 'Key to all the Mythologies'. She is rapidly disillusioned; he spends their honeymoon on tireless research... Part of the novel also follows Tertius Lydgate, the ambitious doctor who yearns for scientific discovery and who strives... for reforms in medical practice. He falls in love with Rosamund Vincy, and discovers too late that his wife is interested in nothing but the effect her person makes... MIDDLEMARCH… Read more
Item Price
NZ$4,236.50
NZ$47.03 shipping to NZL 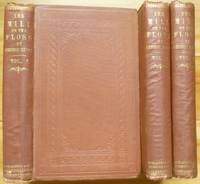 Description:
1860. In Three Volumes. Edinburgh and London: William Blackwood and Sons, 1860. 16 pp Vol III undated ads. Original blind-stamped cinnamon-brown cloth. First Edition. This is the sad tale of Maggie Tulliver, from the Dorlcote Mill on the Floss River -- a novel noteworthy more for its accurate depiction of rural characters than for its rather drastic solution to an intricate plot. The novel also helped to break new ground in what was "acceptable" fare for reading: on a boating trip Maggie is "innocently but irremediably compromised" by her cousin's fiancé -- a fate to be shared by Thomas Hardy's TESS over thirty years later. This copy does not have the preliminary ad leaf in Vol I; according to Carter this is the first state, as the leaf was inserted in the later copies issued. The volumes are in Carter's binding 'B', with the Edmonds & Remnants binder's ticket (the 'A' binding, identical except for the spine gilt, typically was by "Burn & Co."); Carter "hypothesizes" that 'B' might have… Read more
Item Price
NZ$1,938.74
NZ$47.03 shipping to NZL

Description:
1932. Fragments of an Aristophanic Melodrama. London: Faber & Faber, (1932). Original light blue paper-covered boards lettered in red. First Edition, which consisted of 4100 copies. There was no American edition. Eliot later wrote, as a note in an anthology of one-act plays, The author wishes to point out that SWEENEY AGONISTES is not a one-act play and was never designed as such. It consists of two fragments. But as the author has abandoned any intention of completing them, these two fragmentary scenes have frequently been produced as a one-act play. This copy is from the first issue, in light blue (and not blue-green) boards. The volume is in clean, near-fine condition (a hair-line crack at the end of one joint); the jacket is near-fine as well (a few short nicks, very minor soil). Gallup A23.
Item Price
NZ$143.61
NZ$47.03 shipping to NZL