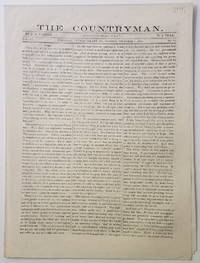 Description:
The Countryman is the only newspaper known to have been published on a Southern plantation. J.A. Turner was the owner of the Turnwold plantation and editor of the newspaper. This issue features a full-page editorial titled "God Bless Our Southern Women!" which extolled their virtues during wartime. Also of interest is a full page devoted to "Teaching Negroes to Read." (The author of the piece was quite clear in his views of educating slaves: "Negroes are incapable of education, and it will be a waste of our time and resources to attempt to confer it upon them…")
Joel Chandler Harris, author of the Uncle Remus, Brer Rabbit and Brer Fox stories, was employed as a printer's apprentice at Turnwold from 1862 (at which time he was 16 years old) to 1866. Indeed it was during his employment at Turnwold that he heard the stories told by slaves which served as the basis for his later successful literary efforts. This issue of The Countryman contains a brief item about a recipe for making black… Read more
Item Price
US$750.00
US$10.00 shipping to USA