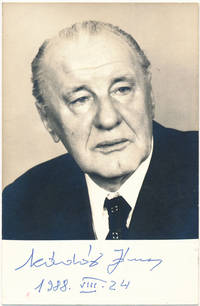 Description:
New York: Holt, Rinehart and Winston, 1982. Hardcover. Small 4to. Tan cloth spine and grey paper over boards, dust jacket. viii, 676pp. Very good/neare fine. TRext has a number of checkmarks inked in marginsa throughout, else tight and clean. First edition of this important reference.
Item Price
US$40.00
US$5.00 shipping to USA 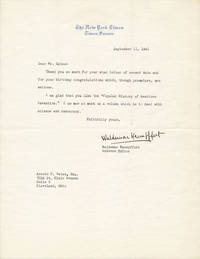 Description:
This all-around science guy edited "Scientific American" and "Popular Science Monthly" until named first director of Chicago's new Museum of Science and Industry in 1928; that fizzled after a few years and he became "The New York Times" editor of science and engineering for the remainder of his life; in his spare time he penned a handful of books about a wide range of science topics. TNS, 1p, 8½" X 11", New York, NY, 11 September 1941. Addressed to Arnold F. Gates (1914-93, noted Lincoln/Civil War scholar). Very good. Light original folds. On "The New York Times" letterhead, Kaempffert thanks an admirer for kind words about his most well-known book: "I am glad that you like the 'Popular History of American Invention.' I am now at work on a volume which is to deal with science and democracy...." Boldly signed in black ink.
Item Price
US$55.00
US$5.00 shipping to USA 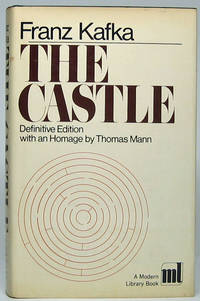 Description:
This much-decorated Knight's Cross recipient was a major in the German army during World War Two, and as commander of Panzer-Abteilung 503 he took part in the invasion of Poland, the battle of France and other important engagements. PS, 3½" X 5", n.p., n.y. Fine. Modern reproduction of a WW2-era head-and-shoulders closeup of Kageneck in uniform wearing his Knight's Cross, signed boldly by him in black ballpoint on the blank lower margin. Uncommon.
Item Price
US$75.00
US$5.00 shipping to USA

Description:
This much decorated, Knight's Cross winning Luftwaffe ace participated in an extraordinary range of theatres during World War Two, racking up 68 victories in an astonishing 1200 combat missions. ALS (German), 1p, 8¼" X 11", Felde, Germany, 10 August 1997. Addressed to Linda Witham. Fine. Friendly letter to an American admirer in blue ballpoint, thanking her and transmitting a signed photograph -- which is present, 3½" X 5", a modern reproduction of a WW2-era black and white snapshot of a jaunty, smiling Kaiser standing in uniform with hands on hips. Signed boldly horizontally in a light area at right in vivid blue ink. With original envelope, addressed in Kaiser's hand.
Item Price
US$125.00
US$5.00 shipping to USA