Description:
Dusseldorf: Selbstverlag (self-published) 1917, 1917. 226 x 150 mm. pp. [viii], 124. Illustrated with 130 (in fact 131) images mostly showing tatting patterns. Text in German. Original grey/brown paper over boards, spine in brown leather. Upper cover lettered in black and white with tatting illustration attached. Some slight scuffing to lower cover and bumping to foot of spine but overall a very good copy, internally near fine. Tatting seems to involve knotting together pieces of thread to make allegedly eye-like patterns which, together produce moderately pretty but completely useless items of decoration. Indulging in this as a hobby is, it would seem, an example of "demonstrative idleness". Apparently it is popular again. This is a nice copy of a book on an unfathomable subject.
Item Price
US$58.10
US$14.14 shipping to USA

Description:
Norfolk Coracle 1996, 1996. Small 8vo, unpaginated, illustrated throughout in B&W. Near-fine in blood-red cloth with applied B&W plate to upper board and stamped titles. Limited, numbered & signed 89/100. A series of haiku-like meditations on landscape.
Item Price
US$96.84
US$14.14 shipping to USA 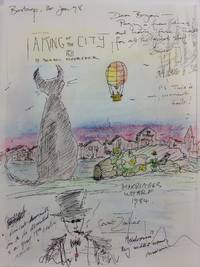 Description:
30th Jan '98, 1998. Single sheet letter on tissue paper. A letter written in Moorcock's anarchic manner with short notes and illustrations. The main greeting reads: "Dear Bryan - Paying a few dues and having fun. Thanks for all the great stuff. Sincerely M.M." The letter also contains a coloured pen and ink sketch of a cat-like creature sitting contemplating a townscape with a hot air balloon in the sky below a frame with the words: "A King and City by Michael Moorcock". This book, the sequel to his acclaimed and visionary Mother London, was published in 2000. This drawing therefore pre-dates publication by two years and is perhaps an early version - the author's own vision - of a potential cover. Below the cat is a sketch of Count Zodiac, a recurring Moorcock character. As a P.S. to Moorcock's note to Bryan, he writes "This is my current book". The 'current' book is Tales from the Texas Woods which is also offered here. It is in immaculate condition with a fine illustrated dust jacket. Inscribed:… Read more
Item Price
US$484.20
US$14.14 shipping to USA

Description:
London: Strahan and Company 1869, 1869. First edition. Two volumes. 8vo. (220x140mm). pp. xii, 384; xii, 384. Sixty four Illustrations by Marcus Stone. Half-titles present in both volumes. Original publisher's green cloth decorated in blind to the upper and lower covers with an "X" pattern on which the title and author is stamped in blind. Title and author in gilt to spine. The binding is in generally quite poor condition with cracking to the hinges, wear to the corners and edges and chipping and wear to the head and foot of the spines. It is, however, rare to find this book in its original cloth. The contents are in very good condition with only modest marking. He knew he was right is one of Trollope's darkest and most interesting novels. A study of intense and insane jealousy, it was based on Othello and won the praise of Henry James who described it as an "impressive completeness of misery".
Item Price
US$451.92
US$14.14 shipping to USA 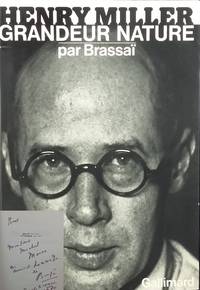 Description:
Paris: Gallimard 1975, 1975. 8vo, 204 by 140mm. 264pp, 16pp of superb black and white photogrpahs. Near-fine in publisher's card covers with black and white wraps with font photograph of Miller. Inscribed by Brassai on the flyleaf with; "Pour monsieur Michel Moir(n)e en amical hommage Brassai (Day unclear - mardi?) 18 NOV 1975". This soft cover edition was published on 7th November 1975, the year of publication of the first edition.
Item Price
US$322.80
US$14.14 shipping to USA 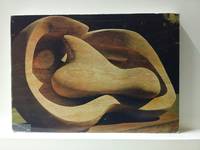 Description:
New York:  M.Knoedler & Co./Marlborough Gallery 1970, 1970. Presentation copy from Henry Moore to his assistant: "For Eva, with love and great admiration from Henry, Much Hadham, May 12th 1970." Oblong 4to. pp. 108. Many illustrations, those in colour tipped-in. Stiff illustrated boards, slight bumping at corners. Original slipcase, torn at extremities but repaired. Otherwise a near fine copy. Near fine. Slipcase good/fair
Item Price
US$258.24
US$14.14 shipping to USA

Description:
London: John Murray 1835, 1835. First edition. 2 volumes, 4to. Vol 1: [xx], 561, 89pp analytical index w/ 12 line figures. Vol 2: 97 single-leaf engraved plates, each with guard leaves. All edges gilt and textblocks tight with only minimal toning to edges. In contemporary publishers full dark-olive morocco with wide borders of scrolled and foliate gilt-line work to upper and lower boards of both volumes, gilt-ruled outer borders with decorative corners. Pastedowns have triple gilt-ruled dentelles with scrolled detail. Backstrips have 5 raised bands with foliate scrollwork panels in gilt, gilt titles and "London 1835" to the foot of each. The pastedowns have the small armorial bookplates of Charles Rugge-Price, 3rd Baronet Rugge-Price and both volumes retain their royal-blue silk place markers (vol 2's fragile at head end and vol 1's slightly frayed at foot with light fading to the ends of both). The binding is still tight with some moderate rubbing and shelfwear to the edges,… Read more
Item Price
US$322.80
US$14.14 shipping to USA 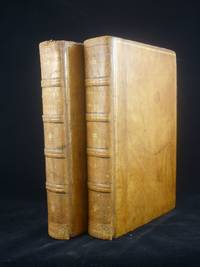 Description:
Newcastle: Printed by Edward Walker, for T. Bewick: sold by him and Longman and Rees, London 1805, 1805. Vol. I. Third edition. Royal Octavo. (8vo in 4s) pp. [i-xxxviii], 346. Vol. II. Second edition. Royal Octavo. (8vo in 4s) pp. [i-xxii], 400. Full brown calf. Spine with four raised bands and five compartments. Author and title in gold in second compartment, volume number in fourth compartment. Quatrefoil decoration in compartments 1,3 and 5. Gilt stamped decoration to head and foot of spine. Gilt decorated border and blind tooled diamond pattern to upper and lower covers. Green end papers. A very good binding. There is some modest browning to the contents but overall this handsome set is in excellent condition. Thomas Bewick Roscoe, 18b, 19b.
Item Price
US$613.32
US$14.14 shipping to USA 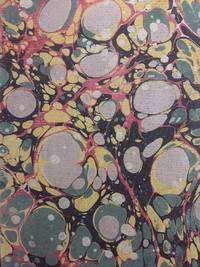 Description:
Lynn: Printed and sold by W. Whittingham; R. Baldwin; H. Gardner; W. Lane. MDDCLXXVI [1776], 1776. First edition. 8vo (222x125mm). pp. 4, 412. Folding frontispiece engraving of The View of Great Yarmouth. Red, straight-grained full morocco, spine with five raised bands, compartments elaborately decorated in gilt. Gilt dentelles and marbled endpapers. Some very modest rubbing to extremities and bumping to corners but a lovely near contemporary binding in excellent condition. Some browning internally but a nice clean, crisp copy. Dark blue silk ribbon bookmark. Charles Dickens, who stayed in Great Yarmouth when writing David Copperfield, is said to have described the town as "the finest place in the universe". That must surely be a minority view among even the most loyal of residents but Yarmouth is a handsome town with a long and interesting history as this attractive book makes clear.
Item Price
US$581.04
US$14.14 shipping to USA 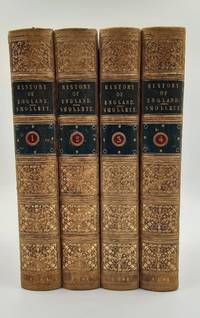 Description:
London: Printed for T. Cadell 1841. A New Edition with the Author's Last Corrections and Improvements. In Four Volumes. Full contemporary calf, spine lavishly decorated in gilt, green labels lettered in gilt. Marbled endpapers. All edges marbled. Some wear and rubbing to extremities and slight scuffing to the boards. The text block of all four volumes is in superb, immaculately clean condition. Frontispiece portrait of Smollett. A very attractive set.
Item Price
US$258.24
US$14.14 shipping to USA 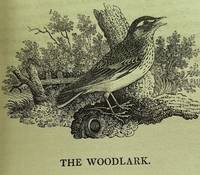 Description:
Newcastle: Printed by Edward Walker, for T. Bewick: sold by him and E. Charnley, Newcastle; and Longman and Co, London 1821, 1821. Two volumes. Vol. I. Seventh edition. 8vo in 4s. (225x135mm). pp. xl, 43-330, 50, [2]. Vol. II. Fifth edition. 8vo in 4s. pp. xxii, 19-360, 50. Both volumes contain the first edition of the supplement. Tan half calf, marbled paper boards. Spine decorated in gilt and blind. Black morocco labels, lettered in gilt. Rubbing to boards and spine. Internally in excellent condition. Volume two has some foxing and browning but overall a nice set in good condition. These 1821 editions also contain the first editions of the Supplements. As Roscoe says, "By 1821 Bewick had gathered in much new material...[and] was able to introduce twenty-nine new descriptions and thirty-eight new figures, as well as a number of much revised descriptions". Roscoe, 24c, 25c, and 26c, 27c.
Item Price
US$225.96
US$14.14 shipping to USA 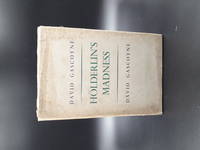 Description:
London: J.M.Dent and Sons Ltd. [1938], 1938. First edition. 4to. 195x133mm. pp. [x], 48. Frontispiece portrait of Hölderlin. Original grey cloth. Dustjacket with tear to foot of spine, about half an inch missing. Other closed tears repaired. Marking and staining to upper cover of dust jacket. Contents in very good condition. Ownership signature of Kathleen Raine on front free endpaper - it is signed "Kathleen" but checking against other examples of her handwriting, it is clearly Raine's. She was a close friend of Gascoyne (initially through the poet Charles Madge who married Raine in 1938, the year of the publication of this collection). Hölderlin's Madness contains an introductory essay followed by 24 poems. These are loose translations of work by Holderlin but rendered into Gascoyne deceptively simple forms.
Item Price
US$129.12
US$14.14 shipping to USA

Description:
Antwerp: Department of Propaganda and Tourism N.D. circa 1950, 1950. First edition. Folio. pp. [viii], 16, recto only. Portrait on title-page and 16 illustrations, loosely inserted in an original red simulated leather folder with gilt crest on upper cover, bevelled edges. A photographic record of Ruben's restored house in Antwerp. The artistic creator and very soul of this commission was Em. Van Averbeke, chief architect to the city. Folder slightly rubbed at head and foot of spine, otherwise a very good copy.
Item Price
US$58.10
US$14.14 shipping to USA

Description:
New York: Dover Publications, Inc. 1955, 1955. 4to. 270x195mm. pp. [xviii], 95 double page plates of men, 85 double page plates of men and 14 double page plates of children. Blue cloth, lettered in gilt to spine. Tear of c1cm to top of hinge on upper cover and lacking dust jacket but otherwise a very good copy. Introductory essay by Professor Robert Taft. This copy of the Dover Edition of Muybridge's celebrated and exhaustive study of the movement of the human body was owned by Francis Bacon. Like many artists, Bacon was hugely influenced by Muybridge's detailed images of the human figure as it moves and changes its positions while walking, running, jumping or just sitting. Attached by paperclip to the front free endpaper is a note with the address, written in Bacon's hand, "Chez Peppiatt, 14 Rue de Birague, Tel. 887-35-37". Michael Peppiatt was one of Bacon's best friends and he had bought this flat in Paris for Bacon to use as a studio. This book was given by Bacon to… Read more
Item Price
US$2,259.60
US$14.14 shipping to USA