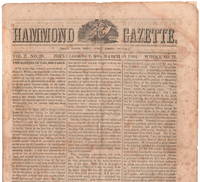 Description:
A nice example of a very uncommon newspaper printed weekly for the staff and patients of Hammond General (or Point Lookout) Hospital during 1863 and 1864. This Hospital for Union troops was constructed at the location of a summer resort on an isolated peninsula extending into Chesapeake Bay. After the Battle of Gettysburg, during which a large number of Confederate troops were captured, Point Lookout also quickly became the location of the largest Union prison camp.
The newspaper carries war news, some general news and even a bit of poetry. The back page contains a list of the staff of the Hospital as well as the names, States and units of the current patients. There were about 250 patients at the Hospital when this issue of the newspaper was printed.
The newspaper also contains several Army reports and notices, including one noting the continued poor health of General Meade and the likelihood that "in consequence thereof General Grant will command the army in person." Also included is a… Read more
Item Price
US$400.00
US$10.00 shipping to USA 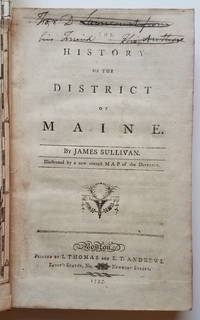 Description:
This is the first general history of Maine, written in the post-Revolutionary War time period that saw several state histories published, including those by Belknap, Jefferson and Ramsay. Despite its distinctly chilly initial reception and the less than impressive editorial standards, Sullivan's History
is a cornerstone work in any collection of Maine material.
The History
includes as the frontispiece Osgood Carleton's A Map of the District of Maine Drawn from the latest Surveys and other best Authorities by Osgood Carleton. The map, measuring 20 5/16 x 16 3/8", includes an inset titled A Map of those parts of the Country most famous for being harassed [sic] by the Indians. Carleton's map was the most detailed done of Maine to that time.
At the head of the title page is an inscription which has been lined out: "For D. Laincourt[?] from his Friend, the Author."
References: Evans: 29589. Howes, USiana: S-1122. Sabin: 93499. Williamson, A Bibliography of the State of Maine: 9608. Thompson:… Read more
Item Price
US$2,250.00
US$10.00 shipping to USA 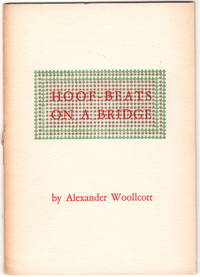 Description:
The Foreside Press was an amateur press established by Marybelle and Royal Boston in 1957 at Falmouth Foreside, Maine. The Bostons and the Press moved to Southern Pines, North Carolina in 1970. The output of the Press appears to have been limited to annual Christmas keepsakes published for the proprietors' friends between 1957 and 1985. The booklet offered here was published in December, 1963. It was "[r]eprinted without permission from 'Long, Long Ago,' Viking Press copyright 1943." A review of OCLC indicates five of the approximately 25 titles published by the Foreside Press are held by one or more institutions. This title is not among them. [ICN 7368.2.]
Item Price
US$25.00
US$10.00 shipping to USA