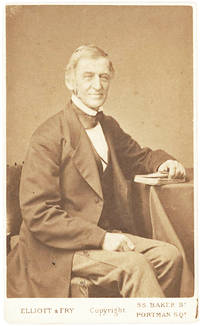 The son of a Unitarian minister, Emerson entered Harvard College at age 14 and became the class poet. After his graduation he headed south where he was deeply affected by the institution of slavery. Upon his return to Massachusetts, he worked as a teacher and in Daniel Webster's law office, before distinguishing himself as a student at Harvard's Divinity School. Eventually, he grew disillusioned by the church's teachings and left for England where he met Wordsworth, Coleridge and Carlyle.

Upon his return to the United States, he settled in Concord and joined the booming lecture circuit, delivering his first public talk in 1833 and, over the next five decades, continuing to speak on topics as diverse as science, religion, history, and philosophy. Through his published essays, he became known in Europe and America as "the bringer of a new religion which somehow squared with the times even while it supplied a method for criticizing them," (DAB). Emerson's home in Concord became the epicenter of Transcendentalism as Emerson found himself increasingly, if reluctantly, drawn into movements for social reform. Despite his involvement, "his attitude... was the attitude of a poet and philosopher; his game was the intellect, and his goal the triumph of invisible – though none the less potent - ideas," (ibid.).

On June 28, 1876, Emerson found himself the honored guest at the University of Virginia, where he lectured on "The Natural and Permanent Functions of the Scholar." Emerson and his daughter returned to Concord on July 1st or 2nd.

At Lion Heart Autographs, every autograph we sell is unconditionally guaranteed authentic without time limit to the original purchaser. Autographs are sent on 3-day approval and for refund purposes, must be returned in the same condition they were sent.

Since 1978, Lion Heart Autographs has been one of the world's leading dealers in historical autographs and manuscripts in the subject areas of art, history, literature, music, and science.

verso
The page bound on the left side of a book, opposite to the recto page.
fine
A book in fine condition exhibits no flaws. A fine condition book closely approaches As New condition, but may lack the...[more]
New
A new book is a book previously not circulated to a buyer. Although a new book is typically free of any faults or defects,...[more]

Where can I get my book appraised?

Do you need to get an appraisal for a valuable book? This short guide from our Book Collecting Guide might help.