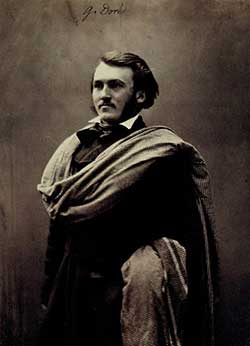 Though he primarily worked with wood engraving, Gustave Doré (1832-1883) was an artist, illustrator, sculptor. Believed to be a child prodigy, Doré was carving his own lithographic stones at the age of 12, making sets of engravings with stories to go with them. At age 15, Doré's first book was published by Charles Philipon, a satire titled The Labours of Hercules (1847). The book-written, drawn, and engraved all entirely by Doré-is now extremely rare. Later that year, Doré became a caricaturist and the featured artist for Philipon's new humor weekly, Le Journal pour rire, and by the age of 16, Doré was the highest paid illustrator in France.

In 1853, Doré was asked to illustrate the works of Lord Byron. The commission was followed by additional work for British publishers and thus, Doré decided to launch himself into the field of literary engravings, including commission for a new illustrated English Bible. In this project, Doré made optimum use of contrast and chiaroscuro, often reaching quite mystical effects. His Bible illustrations were a great success, promoting a major exhibition of Doré's work in London in 1867. This exhibition then led to the foundation of the Doré Gallery in Bond Street, London. The gallery was open continuously in London for 25 years and then it toured the U.S. In the 1850s and 60s, Doré illustrated dozens of literary works, including a French edition of Cervantes's Don Quixote. His depictions of the knight and his squire, Sancho Panza, have become so famous that they have influenced subsequent readers, artists, and stage and film directors' ideas of the physical "look" of the two characters.

Blanchard Jerrold, the son of Douglas William Jerrold, suggested for Doré work with him to produce a comprehensive portrait of London in 1869. Doré agreed, signing a five-year contract with the publishers Grant & Co. that involved his staying in London for three months a year. The completed book, London: A Pilgrimage (1872), with 180 engravings, enjoyed commercial and popular success, but the work was disliked by many contemporary critics. Some of these critics were concerned with the fact that Doré appeared to focus on the poverty that existed in parts of London. The social commentary masterpiece named Doré a more serious artist, though he continued to produce a steady flow of folios in the 1870s.

Doré's later work included illustrations for new editions of Coleridge's Rime of the Ancient Mariner, Milton's Paradise Lost, Tennyson's The Idylls of the King, The Works of Thomas Hood, and The Divine Comedy. Doré's work also appeared in the weekly newspaper The Illustrated London News. In 1882, Doré accepted his first and last U.S. commission to illustrate an oversized edition of Edgar Allan Poe's ?The Raven? from publisher Harper & Brothers. Doré died early in 1883, just as he was finished ?The Raven? engravings. Years after Doré's death, the 1896 display of the Doré Gallery at the Art Institute of Chicago broke every attendance record of the museum at the time. Ultimately, in its eight months on display, 1.5 million people came to see the Doré exhibition in Chicago. (The previous record for attendance at any U.S. art museum for an entire year had been 600,000.)