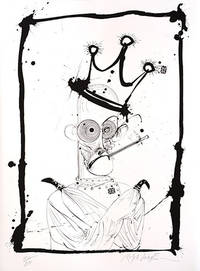 Ralph Steadman (b. 1936) has drawn everything from political caricatures to wine and beer labels to extinct birds, all in his own distinct style. An organic tangle of ink blotches and lines, Steadman’s art famously distorts the subject, while also revealing them in a new way. Born in Wallesey, Liverpool, Steadman’s first job was with De Havilland Aircraft Company as an apprentice aircraft engineer, but he soon found that he could not settle in to factory life. After trying his hand at a few other jobs, Steadman completed his national service in the Royal Air Force (1954-1956) where he worked as a radar operator and learned technical drawing and drafting, which continues to be featured in his art.

Around that time, Steadman enrolled in a Percy V Bradshaw Press Arts School Correspondence Course and began drawing whenever he could, often submitting cartoons to newspapers.

In 1956, Steadman’s first published cartoon appeared in the Manchester Evening Chronicle. He then moved to London when his national service ended with the dream of seeing his work published in the magazine Punch. And after 3 years of submission and rejection, his dream finally came true. His work would be featured within the pages of Punch and, eventually, on its cover. During this time, Steadman simultaneously took courses at London College Printing and Graphic Arts College (1961-1965) and East Ham Technical College (1959-1966), where he met Leslie Richardson, the life drawing teacher who would become his mentor. Steadman continued freelance work for various publications including Private Eye, The Daily Telegraph, The New York Times, and Rolling Stone as well as Punch throughout the 1960s.

In 1969, Scanlan’s Weekly asked Steadman to cover the Kentucky Derby, putting his drawings with maverick journalist Hunter S. Thompson for the first time - a successful collaboration which ignited a 40 year friendship. While covering the Derby, Steadman and Thompson could not actually see the race from their vantage point. The article became more about the decadence and depravity of the event and those who attended it - and thus, Gonzo journalism was born. Steadman and Thompson’s most famous collaborations include Fear and Loathing in Las Vegas (1971) and Fear and Loathing on the Campaign Trail '72 (1973), in which the readers are able to see the world through the same “skewed, booze-sodden, drug-addled prism” as the author and illustrator. Steadman’s artwork for the Fear and Loathing books revolves around Raoul Duke-style caricatures of Thompson: bucket hats, cigarette holder and aviator sunglasses. The two also worked together on The Curse of Lono (1983) as well as numerous articles in Rolling Stone, for which Steadman still holds the position of Gardening Correspondent.

Steadman also tried his hand at children’s books, collaborating with Bernard Stone of Turret Books to create Emergency Mouse (1978), Inspector Mouse (1980), and Quasimodo Mouse (1985). He was commissioned for illustrated editions of a few classics soon after, including Treasure Island (1985), Lewis Carroll’s The Complete Alice (1986), Animal Farm (1995), the English translation of Flann O'Brien's Gaelic-language classic The Poor Mouth (1996), and most recently, the 50th Anniversary Edition of Fahrenheit 451 (2005).

In the late 1980s, Steadman was commissioned by wine merchants Oddbins to produce their wine catalogues and over the following 12 years, he traveled to vineyards in the US, France, Portugal, Australia, and Chile. Mmany of the drawings Ralph did for Oddbins were included in his some of his own books, including The Grapes of Ralph (1992), Still Life with Bottle (1994), and Untrodden Grapes (2005). Steadman also designed labels for Flying Dog Beer and Cardinal "Spiced" Zin' wine, which was banned in Ohio for the illustrator's "disturbing" interpretation of a Catholic cardinal on its label. In 2013, AMMO Books published Proud Too Be Weirrd, a 448-page collection of Steadman’s work.