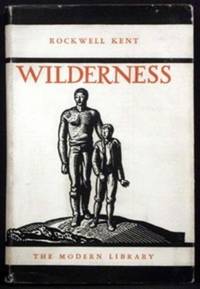 Born to a privileged family in Tarrytown, New York, Rockwell Kent (1882-1971) was granted the opportunity to attended several of the top private schools on the east coast during his youth. He first studied painting during the summer of 1900 under William Merritt Chase while attending the Columbia University School of Architecture. Just prior to his senior year at Columbia, Kent dropped out and enrolled full time at the New York School of Art, where he studied under painters Robert Henri and Kenneth Hayes Miller. Henri encouraged Kent to travel and in 1905, Kent took a trip to Monhegan Island, ME, and then returned the following April to purchase some land. While living on Monhegan Island, Kent met his first wife, Kathleen Whiting, who he married in 1908. The couple had five children together over the next 13 years until their divorce in 1925. Kent married twice more.

With the outbreak of World War I, Kent and his family returned to New York and soon, Kent began to regularly submit cartoons to various magazines under the pseudonym "Hogarth, Jr." His whimsical and irreverent pen-and-ink drawings were published by Vanity Fair, New York Tribune, Harper's Weekly, and the original Life. In 1926, Kent was approached by publisher R.R. Donnelley to produce an illustrated edition of Richard Henry Dana, Jr.'s Two Years Before the Mast. Kent suggested another tale of the sea: Herman Melville's Moby Dick. Published in 1930 by the Lakeside Press of Chicago, the three-volume limited edition (1,000 copies) sold out immediately. A previously obscure book, the Rockwell Kent illustrated edition of Moby Dick not only renewed interest in Melville's work, but also played a major role in white whale's tale becoming recognized as the classic it is today. Some of Kent's other more famous illustrations include Candide (1928), The Canterbury Tales of Geoffrey Chaucer (1930), The Complete Works of William Shakespeare (1936), and Goethe's Faust (1941), among others. Illustrations for lesser-known works include A Basket of Poses (1924), Venus and Adonis (1931), and To Thee, America! (1946).

In addition to adding his own enduring images to classic tales, Kent also profusely illustrated accounts of his personal travels. Enamoured by his first encounter with the beautiful wilderness of Newfoundland in 1914, Kent continued to travel often, making several trips to Alaska, Vermont, Tierra del Fuego, Greenland, Ireland, and Copenhagen throughout the 1920s and 1930s. The first of Kent's several adventure memoirs, Wilderness (1920) is an edited and illustrated compilation of his letters home from Alaska during the summer of 1918. His other written and illustrated works include: Voyaging Southward from the Strait of Magellan (1924), N by E (1930), and Salamina (1935) as well as This is My Own (1940) and It's Me, O Lord (1955), his two autobiographies.

Home > Book Collecting > Illustrators > Rockwell Kent
Yes, we have a new look!
Let us know what you think.