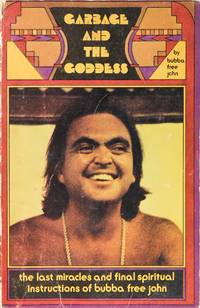 Avatar Adi Da Samraj (born Franklin Albert Jones), founder of a new religious movement known as Adidam, taught of a philosophy similar to many eastern religions, naming spiritual enlightenment as the ultimate priority of human life. During the spiritual counterculture of the 1970s, Adi Da wrote many books about his spiritual philosophy and related matters. He created Dawn Horse Press to publish his books in 1972.

The publisher continues to print many of Adi Da’s titles, including his autobiography, The Knee of Listening (1972). The book has been reissued in a number of editions — undergoing extensive revisions and additions; the first edition of The Knee of Listening is 271 pages and the latest is 840. In addition to the work of Adi Da, Dawn Horse Press also publishes a selection of books from various religious and spiritual traditions of the world.

First editions from Dawn Horse Press either state “First Edition” on the copyright page or have no additional printings listed.