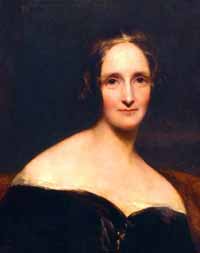 When the tale Frankenstein, or the Modern Prometheus was published anonymously in 1818 it received great acclaim. Many of its readers were convinced that it was the poet Percy Bysshe Shelley who penned the novel because he wrote the foreword. The dark tale of Victor Frankenstein and his monster sprang from the imagination of Percy’s young girlfriend, Mary Wollstonecraft Godwin. The eighteen-year-old crafted the tale on a dark and stormy couple of nights at Villa Diodati on Lake Geneva with Lord Byron, John William Polidori and Claire Clairmont. The pack of bored Romantics decided to pass the time by creating tales with which to frighten each other after reading stories from Fantasmagoriana, to each other.

Mary Shelley was a precocious child. Born on August 30, 1797, as the daughter of a philosopher (William Godwin) and a feminist and social reformer (Mary Wollstonecraft), Mary was largely self-educated through an extensive family library and a parade of poets and intellectuals visiting her parents. Although her mother passed away soon after Mary’s birth, her radical social and political views lit a fire under her daughter. Always a creative soul, Mary published her first book through her father’s company at ten years of age, Monsieur Nongtongpaw.

While many credit Jules Verne or other 1920s authors as the progenitors of the genre of science fiction, others argue that it truly began with eighteen-year-old Mary Shelley, bored in that storm-drenched villa. Frankenstein is largely acknowledged as a hallmark of modern science fiction, as in the telling of her tale, Shelley went beyond the popular Romantic and Gothic tropes of the time, touching on the expanding fields of modern science, social revolution, political philosophy, and even radical sexuality.

Want to truly see her work? Visit Shelley’s Ghost to see her digitized notebooks with the manuscript of Frankenstein!