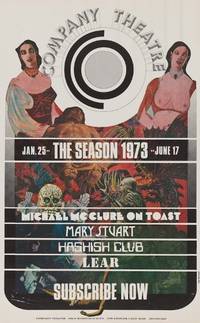 Michael McClure was only 22 years old when he read a poem one fateful night at an auto repair shop turned art gallery on October 7, 1955. His poem, “For the Death of 100 Whales,” went over well, but Michael and the other readers (Philip Lamantia, Gary Snyder, Philip Whalen, and host Kenneth Rexroth) were nearly forgotten after the final reader of the night, Allen Ginsberg, stood to read an early version of “Howl” and blew everyone away.

That performance is now known as The Six-Gallery reading and it is considered to be one of the most important nights in the birth of Beat poetry. Besides the now well-known poets who read were other famous names - Neal Cassady, Lawrence Ferlinghetti, Jack Kerouac, and Ann Charters. Many of them experienced the night as a call to step forward, be louder, and to drag poetry from its staid, acceptable form and bring it out into the vibrant, raw honest light that they saw shining in that gallery that night.

McClure took that charge to heart, creating poetry, stage productions, and song lyrics. He is one of the three lyricists who collaborated on “Mercedes Benz” as recorded by Janis Joplin and he encouraged young Jim Morrison to publish his poetry. His play “The Beard” broke obscenity laws and most performances ended with at least one actor being arrested to rousing applause from the audience.