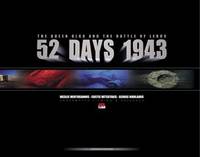 52 Days 1943 - The Queen Olga and the Battle of Leros: Underwater Filming and Research

52 Days 1943 - The Queen Olga and the Battle of Leros: Underwater Filming and Research

"52 Days of 1943" tells the story of the 52-day battle at Leros island and the ship-legend of the Greek Navy "Queen Olga". This album is the result of investigations which lasted almost five years: hundreds of photos, over thirty hours of digital video, underwater shooting by the findings of the war, dozens of hours of discussions with survivors, Greeks and foreigners. The photos are accompanied by short texts, true relay memories, shocking stories of people who were eye-witnesses and illuminate unknown parts of the World War II history.

// ... "depth 42 feet, a German transport plane appears before us, inside us shudder human bones, the sinking of the destroyer "Queen Olga", a legend of the Greek Navy illuminated after 60 years. Dilapidated huge military installations, large canons like those of Navarone, a submarine base, a large rusty crane from Turin once placed hydroplanes, galleries hewn in the mountains, shelters and secret facilities, a surgery room in the heart of the mountain make up an adventure like in a movie. Sensitive human stories of Greeks, Italians, Englishmen and Germans, hard men cry ... a time machine takes us back to the door of the plane that the German paratroopers used to jump to occupy Leros ..."

The last hours of the "Queen Olga"

The "Queen Olga" in action

Greece and Italy at war

The fleet that would not surrender

CHAPTER 3. The Malta of the Aegean

The overall picture and data concerning the war

The Battle of Leros

Events as related in the official German archives

Events as recorded in the official German archives

CHAPTER 5. The fall of Leros

Events from the official German and Italian archives

The "Oria", the unknown "Titanic"

CHAPTER 6. Leros is annexed to Greece

CHAPTER 7. The raising of a legend

A letter from Andrea Hutter, "a crew member in the Ju-52 squadron, who fought on Leros"

IMPORTANT: The price does NOT include the shipping cost which depends on actual weight and destination. You will receive a message after placing the order with the exact cost and the options available; then you will have to approve / reject this cost; you may also ask about this cost before placing the order at dem.siatras@gmail.com .

Seller rating:
This seller has earned a 3 of 5 Stars rating from Biblio customers.
Biblio.co.nz member since: 2011
ATHENS
Ask Seller a Question

Welcome to the wonderful world of collecting Walt Disney! From letters signed by Disney himself to classic children's books or ephemera, be sure to check out some of the collectible Walt Disney books on Biblio!